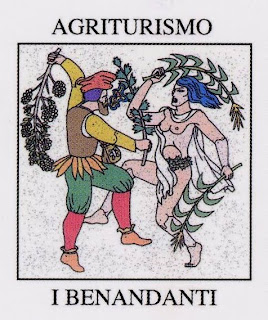 The Benandanti, which literally means ‘good walkers’, was a Northern Italian shamanistic society accused of witchcraft by the Inquisition. But these people, who first caught the attention of the Church in the sixteenth century, were not easy to pin down. They freely admitted that they practiced what were clearly vestiges of older pagan rites but strongly denied being witches, or at least witches in the sense understood by the Inquisition, hateful, diabolical and evil. Indeed, they said that they practiced magic to serve God by battling other, more malign influences in their community. These nightly battles were alleged to have taken place in the district of Friuli right up to 1610.

It was during the Ember days that the Benandanti were under compulsion to serve their communities. Summoned either by drum call, or by angels, refusal to answer was met with a beating. It wasn’t their bodies that travelled, no; it was their souls. A trance was induced allowing the soul to leave the body and thus engage in combat with those described as the Malandanti, the evil walkers. Their souls travelled to these nightly rendezvous in the form of an animal the came forth from their mouths, most typically in the shape of cats, rabbits, butterflies or mice. In this form they travelled to the centre of the earth to encounter the opposing army.

The Inquisition records contain some lovely details of the nocturnal duels. The Benandanti fought with fennel stalks, their opponents with sorghum. The good walkers were also armed with rue, the most powerful magical plant in the Italian arsenal. Saint Lucy was invoked for assistance. She and the rue both offered protection against the effects of the Evil Eye. If they were victorious then the crops and herds would be abundant over the coming year; if not local abundance would wither away.

These people were clearly just part of an ancient pagan fertility cult; small wonder that they frustrated the Inquisition.
Posted by Anastasia F-B at 08:09