Pillars of the Church

History has produced a superabundance of misfits and oddities, perhaps never more so than in the saints and ascetics in the early Christian Church; perhaps never more so in the so-called pillar saints, the most renowned of whom is Saint Simeon, also known as Simon Stylites, who lived in the fourth century AD in what is now Syria. In him a tradition of self-mortification was taken to a particularly acute extreme.

There is something grossly morbid, I have to say, about this man for all of his alleged saintliness, something repellent in his obsessive mortification of the flesh; he was even expelled from the monastic community which he entered at the age of seventeen after several bouts of fasting brought him close to death.

Thereafter, in about 423, he became a stylite, from the Greek stylos, meaning pillar. That is to say he set himself on a nine foot pillar, which increased in size over the years, supposedly in order to escape from those who would interrupt his solitude and meditation, finally taking him some sixty feet from the ground. Here he remained, day and night, through all weathers and all seasons, for the last twenty years of his life.

The plinth, all that remains of the pillar, can still be seen today in the ruined Byzantine church of Saint Simeon a few miles to the north of the modern city of Aleppo. It’s surmounted by a huge boulder, which mysteriously appeared a few decades ago. 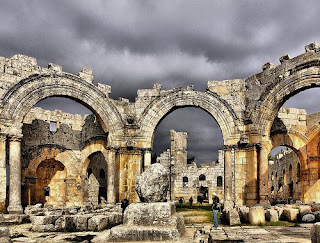 Simeon was never to attain the solitude he craved. As his fame grew, as people became aware of his pathological and morbid devotions, more and more came to see this oddity of faith, including three Byzantine emperors. Bowing to public demand, he delivered exhortations twice daily, also sitting in judgement in the fashion of Solomon on cases brought before him. Still, wedded to that tiny spot, never coming down, there seems to me to be something altogether repellent about this. It was later written that his excrement, which ran down the length of the column, looked like wax from a taper.

Simeon died on the top of his pillar on 24 July, 459, aged about seventy, but his example persisted setting a fashion, setting a trend that looks distinctly Monty Python from the perspective of the modern age. By the sixth century the Orontes Valley around Antioch was crowded with these eccentrics. In From the Holy Mountain William Dalrymple says that if one was struck by lightening- a fairy frequent occurrence- his rivals’ would all interpret this as a sign of God’s displeasure, probably indicating that the unfortunate victim was a secret heretic.

The pillar saints did move west, making it as far as Trier before the trend was eventually abandoned. Why? Well, it was too cold! Saints, like some wines, clearly do not travel well. :-) 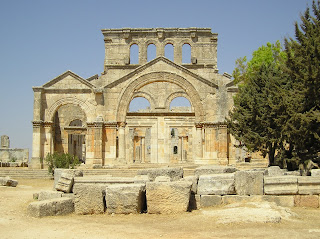