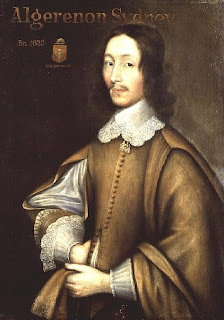 Would you like to know about Algernon Sydney, the republican aristocrat? Well, here is a little elegy that sums up his spirit, and his ideas, very well indeed;

But where's the wandering spirit gone,
Since here he suffered martyrdom?
To heaven? Oh!, it cannot be,
For heaven is a monarchy.
Where then I pray? To purgatory?
That's an idle Romish story.
Such saint as he can't go to hell?
Where is he gone, I prithee tell,
The learned say to Achipotel.

Sidney was executed in December 1683 because the seventeenth century English state allowed for only two things: loyalty and still more loyalty. He was among the first to challenge the contention that opposition to the crown was treason. More than this, it was he, and those who followed in his path, who gave shape to a new and radical truth; that there were circumstances in which the crown itself could behave in a 'treasonable' way towards greeter notions of the public weal. This was the whole point of Discourses Concerning Government, the text for which Sydney lost his life.

For Sydney absolute monarchy, in the form practiced by Charles II, was a great political evil. His Discourses was written during the Exclusion Crisis, as a response to Robert Filmer's Patriarcia, a defence of divine right monarchy, first published in 1680. Sydney was appalled that a free-born Englishman could ever have compiled such a work, a defence of despotism. It was Filmer's business, he wrote, "to overthrow liberty and truth." Patriarchal government was not 'God's will', as Filmer and others contended, because the "Civil powers are purely human ordinances."

In countering the Hobbesian argument that the coercive power of the monarchy was necessary to prevent the return of the Civil Wars, Sydney invoked Tacitus, the Roman historian, saying that the pax Romana, the Imperial peace, was the 'peace of death.' Rebellion may have dangerous consequences but;

They who are already fallen into all that is odious, and shameful and miserable, cannot justify fear...Let the dangers never be so great, there is the possibility of safety while men have life, hands, arms and courage to use them but that people must surely perish who tamely suffer themselves to be oppressed.

All of his life Sydney had been consistent in his support of liberty. He had served in the New Model Army, though he opposed the decision to execute Charles I. In the end Cromwell's absolutism was little better for Sydney than that previously practiced by the king. His dismissal of the Long Parliament in 1653 was the act of a Caeserian dictator, subverting the republic and the constitution. In retirement Sydney was bold enough to outrage the Lord Protector by putting on a performance of Julius Caesar, with himself in the role of Brutus; and Brutus he was to remain.

A republican by deep conviction, he was abroad when the monarchy was restored in 1660, choosing to remain in exile for some years. He was only to return in 1677, almost immediately becoming involved in the growing opposition to rising forms of Stuart absolutism. When Charles dismissed his final Parliament in 1681, saying he would have no more, Sydney united with Shaftesbury and others in plotting against the perceived royal tyranny, of a 'force without authority.' Sydney was later to be implicated in the Rye House Plot, a scheme to assassinate Charles and his brother, though on some very suspect evidence.

Unable to support the indictment against him by any normal legal process, Sydney's writings were produced in court, as a 'false, seditious and traitorous libel', an argument for the people, so said the Solicitor General, to rise up in arms. In response Sydney said that it was easy to condemn him by quoting his words out of context "If you take the scripture to pieces you will make all the penmen of the scripture blasphemous; you may accuse David of saying there is no God and of the Apostles that they were drunk." But for the crown 'to write was to act.'

Sydney maintained faith to the end, declaring on the scaffold "We live in an age that makes truth pass for treason."
Posted by Anastasia F-B at 16:09