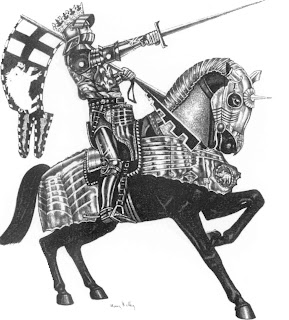 Last November I wrote a piece headed My Kingdom for a Gun; finding Bosworth Field, focusing on the attempt to pinpoint the precise location of this seminal battle. According to the latest reports the task is all but complete. A thumbnail-sized silver gilt boar has been uncovered by the archaeological team. The boar-badge was, of course, the personal emblem of Richard III, the last English king to be killed in battle, and is thought to have been worn by one of his close retainers at the spot where he fell.

The evidence uncovered in the fields straddling Fen Lane in the Leicestershire parish of Upton also includes the badges of the supporters of both Richard and Henry Tudor, as well as twenty-eight lumps of roundshot, in a site that is nearly two miles south-west of what has traditionally been regarded as the centre of the battle.

Frank Baldwin, chairman of the Battlefields Trust charity, has described the discovery as “important to us as Schliemann discovering Troy.” My reaction was that he was, perhaps, allowing himself to be carried away by boyish enthusiasm, but I quite agree with Professor Richard Holmes, a historian for whom I have considerable respect, that “this is certainly the most important discovery about Bosworth in my lifetime.”

On Richard himself my feelings are somewhat ambivalent. I do not share the enthusiasm of the Ricardians for the ‘lost cause’ of their hero king. There is absolutely no doubt in my mind that the Princes in the Tower, King Edward V and Richard duke of York, were indeed murdered on the orders of their uncle; they were simply too dangerous to remain alive. Moreover, I can’t but admire the Tudor dynasty that brought us in Henry VIII and Elizabeth I two of the greatest monarchs in English history.

Still, the romantic in me regrets the loss of the old England, the England of the Plantagenets, the England of Richard III, an enduringly fascinating man for all of his brief flight with destiny.

But yet I know, where’er I go,
That there hath pass’d away a glory from the earth
Posted by Anastasia F-B at 16:19