I am English, by birth, by outlook, by attitude, by instinct; I live, breathe and think England; I love England, love its history, its culture, its people. Yes, I am English but I also love the idea of a greater nation, of Great Britain, as the sixteenth century Scottish historian John Major or Mair once defined it. The Union of England, Wales, Scotland and Northern Ireland is so much greater than the parts.

Over the past three hundred years Britain has brought so much to the world, in peace and in war. England has benefited immeasurably from the Celtic contribution, just as the Celtic nations, though they may no longer like to admit it, have achieved significance in the world far beyond their immediate power and reach. So, yes, I am English but I am also British. It worries me, then, to see SS Great Britain in danger; in danger of sailing on to a particularly pernicious reef. It's called, mundanely enough, the West Lothian Question, long since posed but never answered. Some of you will know it but for those who do not it goes like this:

In its original form it was posed over thirty years ago by Tam Dayell, then Labour MP for the West Lothian constituency, in a debate on devolution in the House of Commons. Well, we now have devolution. Northern Ireland once again is almost completely self-governing; Scotland has a Parliament and Wales an Assembly, with powers over domestic matters...and the West Lothian question has still not been answered.

Irish, Welsh and Scottish MPs still come to Westminster. Irish, Scottish and Welsh MPs can vote on matters pertaining to England alone, while English MPs have no say in the domestic politics of the Celtic nations. We have in Gordon Brown and Alistair Darling a Prime Minister and a Chancellor, both Scots, who can formulate policy and vote on English domestic matters, while English MPs are powerless over matters affecting the constituencies these men come from.

None of this might matter but for one thing: Labour has in the past depended on the support of Scottish and Welsh MPs to achieve a majority in the House of Commons at Westminster. This was irksome, yes, but tolerable within a national framework, tolerable when the reverse process applied: when the Conservatives ruled in Wales and Scotland because they had a majority in England. But it is intolerable in the context of devolution. If, as may very well happen, and perhaps in the not too distant future, a Labour government, with a minority of MPs in England, is propped up by Celtic votes, then the Union will be in real and immediate danger. The English are a tolerant people, but there are limits even to their toleration.

If you care at all for England, for justice and for the Union I would urge you to register your own vote. If the campaign receives enough support it will form part of the Power2010 pledge, and that will mean that Power2010 will lobby every prospective MP to pledge to introduce English Votes on English Laws in the next Parliament.

Let's answer the West Lothian question; let’s end this insult to democracy, let’s end this danger to the union. If you are English, even if you are Scots, Welsh or Irish I would urge you to register a vote in favour of this proposal. http://www.power2010.org.uk/votes/entry/english-votes-on-english-laws 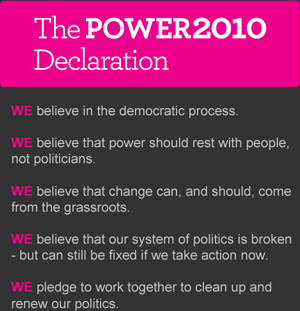