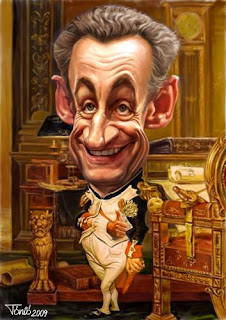 If Super Obama is looking to take some comfort from his dreadful performance he might cast his eye on France, where the approval ratings of Sarko the Dwarf have dipped even further than his, now hovering at forty percent.

There was always something of the opportunist and crook to the character of this facile and absurdly vain little man, but, my, oh my, who would have thought that he had such poor political judgement. The Fifth Republic, the Gaullist state, was always a monarchy, but past presidents, all those who succeeded De Gaulle, at least had the subtlety and the intelligence not to play the game too grandly, to make it too obvious that the Sun King was shining once more.

But along came the Dwarf and we are back in business- L'Etat c'est moi. Having learned nothing from the Prince Jean debacle of last year, when he attempted to squeeze his son into a prestigious position for which he was hugely under qualified, he appointed his friend Henri Proglio to run EDF, the state-controlled energy group. Dear Henri took the job, a nice little earner at 1.6 million euros per annum, but saw no problem in keeping his old job with Veolia Environnement along with the salary.

After being tackled by the socialists, who unkindly reminded the Dwarf King of his calls for a “moralisation of capitalism”, he backed down as he did with Prince Jean. His combination of nepotism with modern forms of simony has even upset business leaders. Dear Henri, it now seems, will now remain as a non-executive chairman for only “a few months”, foregoing the salary during this period.

It’s the arrogance here that has upset most people, the Dwarf’s inability to see a problem in such obvious misuse of power coupled with his contempt for public opinion. An attempt is being made to recapture the mood of 2007, when he campaigned as a ‘man of the people.’ The rebranding began last week when he appeared on a primetime television show, spending over two hours answering questions from a cast of ‘ordinary people’ – a dairy farmer, a car worker, a housewife and a man with a string of onions, a stripy shirt, a beret and a pencil-moustache. Yea, I know, I made that up, the last one anyway. Still, I do wonder if the Sarko team trawled the nation to find people shorter than him, because we all know that he does not like being beside tall people.

It is a sad reflection of Latin politics in general that there is really no credible alternative to the likes of Sarko and Berlusconi, that sleazy old Italian Don Juan. In France there is of course Dominique de Villepin, the former prime minister, now cleared of any guilt in the long-running Clearstream trial. Better-looking, and certainly better educated than the Dwarf, he intends to revive his political career with the hope of becoming a credible right-wing alternative at the next presidential election. But mud sticks and how Sarko has tossed the muck! Meanwhile, the King is in his counting house counting out his money.
Posted by Anastasia F-B at 16:04