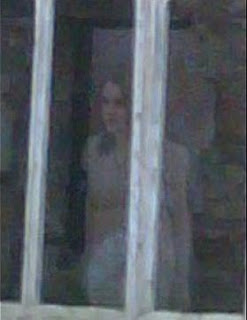 Look at the picture to the right. It was taken recently at Gwrych Castle in Abergele, North Wales. There is nothing unusual, I suppose; it's just a picture of a woman, possibly in her twenties, looking through one of the first floor castle windows, from what is the old banqueting hall. There is one small problem: the floor she should be standing on crumbled away years ago; she is literally walking in the air!

The picture was taken from the outside of the building by one Kevin Horkin, who only noticed the figure later when he was downloading his pictures. Is it a ghost? I honestly can’t say and I’m not entirely sure that I believe in ghosts, or any form of life after a death. Is it a fake, a trick of the light? Again I can’t say, but if it’s trick of the light, it’s some trick; if a fake it’s a highly accomplished one.

Although Gwrych itself, built in 1819, is not particular old it was constructed on the site of an ancient house named ‘Y Fron’ (rounded hill). It was closed to the public in 1985 and has lain empty ever since; apart from the spirit presence, that is! The North Wales Paranormal Research Group says that there have been many sightings of allegedly supernatural entities over the years.

The lawn
Is pressed by unseen feet, and ghosts return
Gently at twilight, gently go at dawn,
The sad intangible who grieve and yearn.... 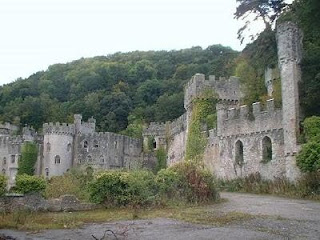