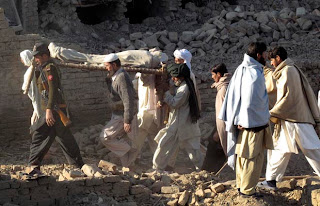 It’s always bad news to get on the wrong side of highland communities anywhere in the world, places with a militant tradition, places where grudges are never forgotten.

This thought was brought on by a recent piece by Decal Walsh in the Guardian (The village that stood up to the Taliban). He reports from Shah Hassan Khel, a village in Lakki Marwat, a district close to the lawless tribal lands in Pakistan’s north-west frontier. On 1 January a suicide bomber killed ninety-seven local people watching a volleyball game. The traditional forty days of mourning are now over; the men are taking to arms. “We will track them down. We will kill them, one by one”, said one of the elders.

The villagers had initially welcomed the Taliban, welcomed their promises of a ‘purer’ Islam, an Islam based on sharia law. But of course purity and ideals are one thing; kidnapping, smuggling and car theft, all intended to augment Taliban funds, are quite another. Even Taliban puritanism became too much, as girls were stopped from going to school and people stopped from watching television. Maulvi Ashraf Ali, the Taliban Don, also became a figure of resentment –“He claimed to be enforcing sharia law. What he really wanted was power.”

So, having had enough of these gangsters, the people of Shah Hassan Khel co-operated with the army in their removal. When they attempted to come back they were chased away, hence the New Year’s gift. The villagers, now armed with AK-47s, are on the hunt for Ali and his followers, believed to be hiding in North Waziristan.

It’s encouraging, certainly, when people are sufficiently motivated to take action against those who would take them back to the Dark Ages. However, this new vendetta is surely another illustration of how weak the Pakistani state truly is in the face of unscrupulous militants, people who would even hijack children as potential suicide bombers.

Meanwhile, as Walsh says, the Taliban has scored one small victory. They hated volleyball, I dare say another sign of western ‘decadence’. Volleyball is no longer played in Shah Hassan Khel. The players are dead.
Posted by Anastasia F-B at 16:12