The Day of the Lion 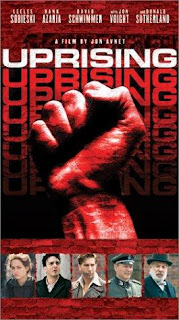 I had a chance to see Uprising recently, a 2001 American-made television drama, directed by Jon Avnet, about the Warsaw Ghetto Rising of April, 1943. So far as I am aware it has never been broadcast in England, which is rather a pity because it’s of a remarkably high quality. It’s reasonably accurate in most regards with close attention to period detail.

There are also some really first rate performances, with Donald Sutherland as Adam Czerniaków, head of the Jewish Council for the Ghetto, Hank Azaria as commander of the Jewish Combat Organisation, David Schwimmer as Yitzak Zuckerman, Sadie Frost as Zivia Lubetkin and John Voight as Major General Jürgen Stroop, the man who led the German assault against the Jewish resisters.

It’s long at over three hours, but I found the whole thing quite compelling. It tells what must have been a fairly typical story throughout the ghettos of Eastern Europe; there is the old establishment represented by Adam Czerniaków, who hopes to mollify the Germans by co-operation and reason, and the young firebrands typified by Mordecai Anielewicz, brilliantly played by Hank Azaria, who see conditions getting worse and believe in the necessity of resistance.

In the end Czerniaków himself recognises that the German demands go beyond all boundaries of reason. In the great deportation of July 1942 he tries to gain and exception for the children of Janusz Korczak’s orphanage. When they refuse he committed suicide, leaving a note saying “They demand me to kill children of my nation with my own hands. I have nothing to do but to die.”

In perhaps the most moving scene of all we see Korczak himself, played by Palle Granditsky, leading the children in perfect order to Umschalgplatz, where they mount the train that will take them to Treblinka and death. Korczak, a prominent pedagogue and writer of children’s fiction, though excused deportation, insists on going with his charges. A witness was later to record of the real life event;

... A miracle occurred. Two hundred children did not cry out. Two hundred pure souls, condemned to death, did not weep. Not one of them ran away. None tried to hide. Like stricken swallows they clung to their teacher and mentor, to their father and brother, Janusz Korczak, so that he might protect and preserve them. Janusz Korczak was marching, his head bent forward, holding the hand of a child, without a hat, a leather belt around his waist, and wearing high boots. A few nurses were followed by two hundred children, dressed in clean and meticulously cared for clothes, as they were being carried to the altar. (...) On all sides the children were surrounded by Germans, Ukrainians, and this time also Jewish policemen. They whipped and fired shots at them. The very stones of the street wept at the sight of the procession.

The film proceeds thereafter to tell the story of the Rising itself, too well known to require a detailed repetition here. In recounting the details of the struggle, of tanks and artillery against opponents mostly armed with light weapons and Molotov cocktails that the director is at his most impressive. The atmosphere and the general tension are all wonderfully recreated, in an almost claustrophobic sense of realism. I knew the outcome, I knew the inevitability of defeat, but, oh my how I admired the courage of these boys and girls who were determined to die as lions, not as sheep.