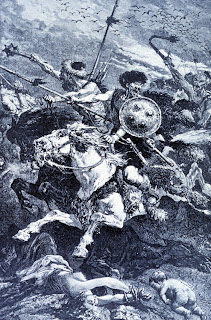 In the hundred years or so leading up to the final collapse of the Western Roman Empire one favoured way of dealing with barbarian incursions was to pay off the chiefs. It worked, up to a point, but they almost invariably came back for more; and when more was no longer enough they eventually took the treasury itself. This form of bribery was a signal to all, to the Huns, the Goths and the Vandals, that while the Empire was still economically strong it was politically and militarily weak.

History invariably moves in great cycles, with patterns repeating themselves time and again. Now the Western Empire is preparing to pay off another set of barbarians, preparing to pay off the Taliban. A Peace and Reintegration Trust Fund has been established after the recent London conference on Afghanistan. This is an initiative long favoured by Hamid Karzai, who believes that he can ‘buy off’ the more moderate members of the Taliban, those who fight not because of any great belief in the message of al-Qaeda but because we are there.

How much of the money allocated for ‘peace and reintegration’ actually gets into the hands of the insurgents and how much into the pockets of the officialdom of Karzai’s corrupt government is really a matter of guesswork. My question is what is to stop a sudden upsurge in Taliban recruitment, as people look for a share of the loot? What is to stop the barbarians coming back for more and more and more?

So far this conflict has cost my country £4 billion pounds alone. It’s also cost the lives of 251 British service personnel to date. For what, I ask, so we can pay off their killers; so we can bribe terrorists? This is the moral abyss, the depths to which we have sunk under this present government, under Dismal Gordon Brown, a man who as Chancellor and Prime Minister starved our army of funds, a man who is now prepared to channel funds from British taxpayers into the hands of an enemy army.

Another question arises here. What happened to the message, so recently presented, that victory in Afghanistan was so vital to our own national security; that failure to stop attacks today in Helmand would lead to attacks tomorrow in London? I long stopped believing that this war was vital to our security. That has been compromised in a far more immediate way by a government that neglected our borders in a criminally incompetent manner.

Beyond this al-Qaeda is essentially a guerrilla organisation, and as such it does not need and it should not have a single and static base, a place where it can be pinned down and eliminated. It’s a movement that can and does move with ease; Afghanistan today, Yemen tomorrow, Somalia the day after. Are we to launch invasions and fight battles in all of the midden heaps of the earth? The truth is, of course, that we have been told lie after lie after lie. Our involvement in Iraq and Afghanistan, coupled with the encouragement of virtually unrestricted immigration, has made this country infinitely less secure than it was when the wretched Labour administration came to power.

Now we are set to bribe our enemies. Oh, yes, the Goths may strike camp-temporarily - but the Vandals and the Huns are waiting just over the horizon.
Posted by Anastasia F-B at 16:25