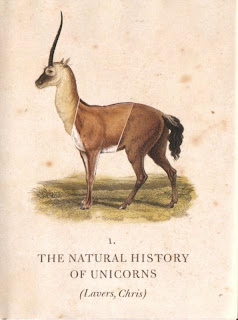 The Natural History of Unicorns is a real treat! Chris Lavers, a writer on science subjects, embarks on an open-minded quest to discover the unicorn; to discover the origins and ‘natural history’ of this fabulous creature, which flits in and out of fact and legend in a tantalisingly elusive way, always just beyond the next horizon, always just at the limits of sight.

The author does not assume anything, does not work backwards from a pre-determined conclusion, but treats his quest in a scholarly though always lively manner. His epigraph is admirable: “There are two things to avoid in dealing with a legend. The first is to make too much of it, the other is to disbelieve it entirely.” And for enthusiasts there is a tantalising promise in his introduction, “For most recorded history people thought that the unicorn existed. Recently we have come to know that it never did: so this book must end in disappointment. Not so. Unicorns did exist. There are photographs.”

Yes, it’s a natural history of a particularly fascinating kind; but it is also an examination of symbols, of religious beliefs, of art, of language, of semantics, of exploration and of transformation.

Lavers traces the origins of the legend back to a Greek historian and physician by the name of Ctesias of Cnidus, writing in 398BC. While in Persia , ministering to the king and his court, he wrote of a tale that had come from India of “…certain wild asses which are as large as horses, and larger. Their bodies are white, their heads dark red, and their eyes dark blue. They have a horn on the forehead which is about a foot and a half in length.”

It is from this point that the author begins his hunt, with the fauna of India , each and every creature that could in any way resemble that described by Ctesias. We meet the Indian rhino, the Tibetan antelope, the yak and a rather fearsome ass known as a kiang. Trails are followed assiduously back through time, allowing us to discover not one fantastic beast but a range of real ones. They are disassembled and reassembled to give us something unique.

So the journey goes on, as myth and nature come close, but never quite meet. Ctesias’ wild ass even manages to appear in the Bible, though the numerous references to unicorns in the King James Version are based on a mistranslation from the Hebrew to the Greek. Instead of a unicorn the Bible authors were most likely talking about an ox.

Lavers takes us through time and over distance in his quest, passing civilizations and natural habitats, from Asia to the Arctic . The Chimera takes shape out of a variety of sources and a wealth of mythologies. It is this which transforms such mundane objects as the walrus tusk or the narwhal tooth into something quite different. Lavers is at his most compelling in his blend of natural history with local legend; legends which give rise to new legends, new quests, and ever more intriguing transformations.

The unicorn exists, yes; it exists as a symbol of so many things, of nature itself, perhaps, wild and untamable. But in the end it is caught and it is tamed. Its journey through the forests of time and experience end when it sits down in the company of a maiden, becoming a symbol of Christ in the company of Mary. Now mild and meek, it makes its way through Christian hagiography, through medieval iconography into a New Age avatar.

And, yes, there are photographs!
Posted by Anastasia F-B at 16:39