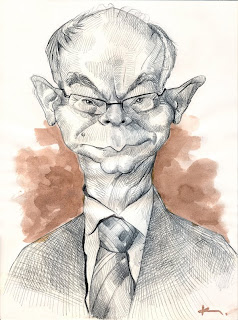 Did you see Herman van Rumpuy, Rumpey van Pumpy, as I prefer to think of him, trundled out last week to fumble over his statement reassuring the markets that all is sound in euro land? What did you think, not about the statement or about his performance, no, about him? I found myself recalling Mark Twain’s famous remark “The report of my death was an exaggeration”, hotly followed by Dorothy Parker’s response on being told of the demise of the notoriously laconic President Calvin Coolidge “How can they tell?”

There he is, dear old Rumpy Pumpy, the living shape of the Continent, the man Henry Kissinger would call when he wanted to talk to Europe. All that fuss and effort, all those discarded referenda, all those endless debates over constitutions and treaties; all that wasted money. What was the result of these Herculean labours? Why, Rumpey van Pumpey, the front man for the Paris-Berlin Axis. 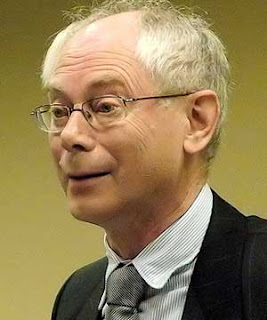 I’m being too hard, I suppose; the poor old soul is a symptom, not the disease, a symptom of the whole rotten anti-democratic European project, a man so tepid he makes Gordon Brown look charming and charismatic. Apparently Barack Obama has declined an invitation to attend the Euro summit in May, saying he’s “too busy”; either that or he simply can’t face Rumpy.

Let me leave you with a quotation:

It is highly questionable whether when 'Europe speaks with one voice', as we are so often told it is doing, anyone is really listening. Europe's reputation as a serious player in international affairs is unenviable. It is a feeble giant whose desperate attempts to be taken seriously are largely risible. 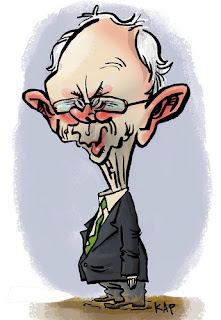 Perhaps you can guess who wrote this? How prescient, how apposite it is: Europe, a feeble giant, speaking with the risible voice of President Rumpey van Pumpey. I wonder what Dorothy Parker would have made of him? :-))
Posted by Anastasia F-B at 16:45