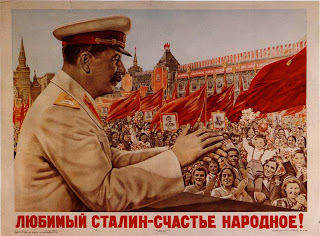 I saw from a brief report in the British press that Stalin is set to return to Moscow. His portrait is to appear on public buildings prior to 9 May, the day the Russians celebrate the end of the Second World War. This is clearly part of the present drive to create a more ‘positive’ image of Russia’s past, embracing a repackaging of its bloodiest tyrant, a programme fully supported by Premier Putin, moving forwards on some fronts, backwards on others.

In responding to criticism that it is wrong to glorify a man who caused so many deaths, Vladimir Makarov, a city official, said “We need to remember the man who led our country in war.” Yes, that may be true, but there are other things worth remembering, not least of which that this is a man who nearly destroyed Russia in war.

In the original victory parade of May 1945 it was Marshall Zhukov who took the salute, because Stalin was too scared to sit on a horse. Zhukov was later to find himself a victim of the Great Leader’s paranoia and petty jealousy, although his demotion was nothing when compared with the almost total destruction of the senior command of the army, navy and air force in 1937 during the Purge.

Russia was robbed at a crucial time of the services of the likes of Mikhail Tukhachevsky, possibly the most talented soldier of the day, certainly the equal of any senior German officer in imaginative strategic thinking. In his place came Kliment Voroshilov and Semyon Budyonny, whose servility was only equalled by their stupidity. These, along with Stalin, were the masters of the ‘don’t give an inch’ strategy which almost brought total defeat after the German invasion in 1941.

It’s often said that Stalin trusted nobody, not even his closest acquaintances. That’s not true; there was one man he trusted- he trusted Adolf Hitler. In the early months of 1941 the Kremlin received report after report that German forces were massing on their western frontier. Stalin ignored communiqués from Churchill; he ignored communist agents in the west; he ignored the reports of Richard Sorge, his best agent by far. He even ignored German deserters who crossed the border with a warning. They were simply tortured and then shot as provocateurs. His trust was deep, naïve and child-like in the extreme, so much so that he lapsed into a kind of mental seizure after the German onslaught began in June 1941, refusing to believe what was happening, even blaming the invasion on ‘renegade’ generals.

It was Stalin’s errors that caused the catastrophic early defeats, costing Russia millions of men, killed or captured. It was wasteful, it was stupid and but for even greater stupidity on the part of Hitler it would almost certainly have ended in defeat. As it was Stalin continued to waste men and materials in needless and pointless offensives. So, if Stalin is to be remembered it should be for these things; for this was the style of the leadership that he brought to Russia.
Posted by Anastasia F-B at 15:57