Does Greece Have Wings? 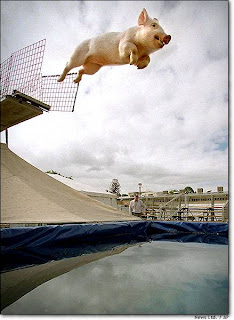 "The time has come", Ana said,
"To talk of many things:
Of shoes -and ships -and Eurocrats
Of cabbages - and kings -
And why Brussels is boiling hot -
And whether Greece has wings."

I recently became aware of a new acronym -Piigs, taken from the initial letter of those countries unfortunate enough to belong to the soft underbelly of the Eurozone: Portugal, Italy, Ireland, Greece and Spain. I'm now watching events in Greece with considerable interest because this is the beginning of what is set to become a rolling crisis, one that may very well flood the rotten core of the European Soviet Union (ESU) like a tsunami.

What the Greek situation exposes is the absurdity of the whole Euro project. This was a crisis waiting to happen: a small, relatively poor country building an economy on unsupportable levels of debt but unable to manage that same economy because it is unable to mange the national currency. You see, a single currency could only ever be built successfully on a unified polity, where a central authority is able to manage just about all of those areas that fall under the prerogative of a sovereign state; where a central authority is able to advance some areas while neglecting others. The Greek crisis is set to expose not only the underlying political weakness of Europe of the Euro; it's also set to expose the limits of national freedom itself. A new bastard Union is likely to arise, increasingly authoritarian in tone; not just undemocratic but anti-democratic.

The Greeks will doubtless emerge from this debacle with their economy bruised but intact, because the Froggies and the Germans have too much of their political credibility bound up in the single currency chimera; because Sarko the Dwarf and Angela the Frump have too much of their personal credibility bound up in the chimera. Yes, Athens will rise again, only to find it has less freedom than it did in the days of the Macedonian hegemony. Domestic policy, spending on a whole set of areas, from health to defence, is likely to be micro-managed by the Eurocrats.

But-joy of joys-let’s see how French and German tax payers enjoy bailing out the profligate Greeks, and then the Portuguese, the Italians, the Irish and the Spanish. Let's see how the Greeks like it when they find out the true political cost of belonging to the club, then they really will wish that they had wings. Keep watching, everyone, keep watching as the Piigs fall to earth one by one. And if you live in Paris or Berlin just wait to see how your prosperity, and your taxes, leaches away.

"I weep for you", Ana said
"I deeply sympathise".
With sobs and tears she sorted out
Those of the smallest size,
Holding her pocket-handkerchief
Before her streaming eyes :-)
Posted by Anastasia F-B at 16:56