Mother of the Corn 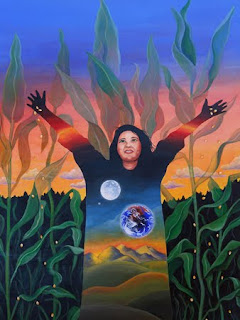 The Corn Mother belongs to an ancient pagan tradition, a deity that embraces creation and destruction, life and death. The two dimensions should not be seen as opposites, as white and black; rather in killing she gives life, and in giving life she kills.

The Corn Mother comes in many forms, sometimes benevolent, other times terrifying. But even in her most fearsome shape –and here I’m thinking of witches like the Russian Baba Yaga and the Ukrainian Iron Woman – she still provides nourishment, just as she can kill in her most benevolent guise.

She embodies the ambivalence of nature itself, fecund and destructive; she embodies human perceptions of the whole cycle of nature. She takes many names over many traditions. For the Greeks she was Demeter; for the Canaanites she was Anat; for the Etruscans she was Ceres; and for the Egyptians she was Isis. The Christians refashioned her as the Virgin Mary, drawing on older traditions, recreating the Mother Goddess in their own image.

Virgo itself is the constellation identified with the Corn Mother. The astrological sign’s modern image is based on the Babylonian depiction of a mother carrying a sheaf of corn, where the sheaf was simultaneously understood to indicate a child. This is the whole heart of so many mystery religions: the child is the mystery; the mother the life-giving deity.

Her image was corrupted and demonised in the Middle Ages. Corn Mothers became scary cannibal hags, who lay in wait in cornfields for unwitting children. But the old duality persisted, as with Baba Yaga, dangerous but also a source of wisdom, healing and protection.

The Traditions of the Corn Mother and the Corn Maiden were still being celebrated in Europe right into the twentieth century. In The Golden Bough James George Frazer records the following;

In the neighbourhood of Danzig the person who cuts the last ears of corn makes them into a doll, which is called the Corn-mother or the Old Woman and is brought home on the last waggon. In some parts of Holstein the last sheaf is dressed in women's clothes and called the Corn-mother. It is carried home on the last waggon, and then thoroughly drenched with water. The drenching with water is doubtless a rain-charm. In the district of Bruck in Styria the last sheaf, called the Corn-mother, is made up into the shape of a woman by the oldest married woman in the village, of an age from 50 to 55 years. The finest ears are plucked out of it and made into a wreath, which, twined with flowers, is carried on her head by the prettiest girl of the village to the farmer or squire, while the Corn-mother is laid down in the barn to keep off the mice. In other villages of the same district the Corn-mother, at the close of harvest, is carried by two lads at the top of a pole. They march behind the girl who wears the wreath to the squire's house, and while he receives the wreath and hangs it up in the hall, the Corn-mother is placed on the top of a pile of wood, where she is the centre of the harvest supper and dance.

It was all part of an ancient rhythm now sadly gone forever.
Posted by Anastasia F-B at 16:36