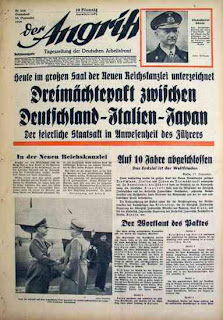 Few people now have ever heard of Leopold von Mildenstein, once involved in an attempt to construct a working political 'partnership' between the Nazi state and Zionist movement. Now, could any subject be more loaded than that?!

I have to move carefully here, and will try to be as objective as I can. The chief point to hold in mind is that the aim of Nazi policy for much of the pre-war period was to encourage as much Jewish migration from Germany as possible. Inevitably, whatever political and ideological differences existed, this aim overlapped, to a significant degree, with similar aims by the Zionists, anxious to establish a Jewish homeland in Palestine.

One has to remember that when the Nazis came to power in January 1933 they had no agreed solution on how the perceived 'Jewish problem' was to be tackled. There were those, of course, like Julius Streicher, who advocated an immediate expulsion of all Jewish people from German territory, though more moderate influences were quick to point out the implications of such a move for the German economy, still in deep depression. Beyond approving limited gestures, like the one-day boycott of Jewish businesses in April 1933, Hitler gave no clear lead in the matter, which left the way open to initiatives by agencies within the state; agencies like the SS, which began to research possible policy options. And from the midst of the SS came Baron Leopold Itz von Mildenstein, a self-appointed 'expert' on the Jewish question.

Mildenstein, who was born in Prague in 1902, had taken an early interest in Zionism, even going so far as to attend Zionist conferences to help deepen his understanding of the movement. He actively promoted Zionism as a way out of the official impasse on the Jewish question; as a way, in other words, of making Germany Judenrein (free of Jews).

The Zionists, whose movement had grown tremendously in popularity among German Jews since Hitler came to power, were keen to co-operate. On April 7 1933 the Juedische Rundschau, the bi-weekly paper of the movement, declared that of all Jewish groups only the Zionist Federation of Germany were capable of approaching the Nazis in good faith as 'honest partners.'

The Federation then commissioned one Kurt Tuchler to make contact with possible Zionist sympathisers within the Nazi Party, with the aim of easing emigration to Palestine. Tuchler approached Mildenstein, who was asked to write something positive about Jewish Palestine in the Nazi press. Mildenstein agreed, on condition that he was allowed to visit the country in person, with Tuchler as his guide. So, in the spring of 1933 an odd little party of four set out from Berlin, consisting of Mildenstein and Tuchler with their respective wives.

Mildenstein's experiences were later reported in twelve instalments in Der Angriff, Goebbels' own paper, beginning on 26 September 1934, under the title Ein Nazi faehrt nach Palestina ( A Nazi travels to Palestine). Perhaps the most curious aspect of this whole bizarre affair is that Der Angriff even commissioned a medal to celebrate this journey, with a Swastika on one side and a Star of David on the other.

On his return, Mildenstein's suggestion that the solution to the Jewish problem lay in mass migration to Palestine was accepted by his superiors within the SS. In 1935 he was put in charge of the Jewish Desk in the RSHA-Section 11/112-, under the overall control of Reinhardt Heydrich. SS officials were even instructed to encourage the activities of the Zionists within the Jewish community, who were to be favoured over the 'assimilationists', said to be the real danger to National Socialism. Even the anti-Jewish Nuremberg Laws of September 1935 had a special Zionist 'provision', allowing the Jews to fly their own flag.

In the end Mildenstein fell out of favour, because migration to Palestine was not proceeding at a fast enough rate. His departure from the RSHA after ten months in office also saw a shift in SS policy, marked by the publication of a pamphlet warning of the dangers of a strong Jewish state in the Middle East. It was written by another 'expert', who had been invited to join Section 11/112 by Mildenstein himself. His name was Adolf Eichmann. 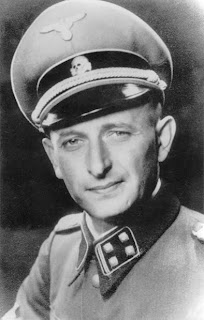