I want to sleep with Muhannad 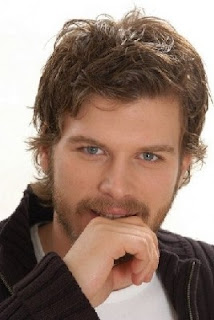 I see the Turks are making some smash TV shows, a smash in the Arab world anyway. There is a show called Valley of the Wolves in which Israelis are shown doing nasty things to Palestinians, but that’s not the most popular, not by a long-way. You see Arabs don’t always go for high politics; they also like a spot of romance; they like a soap-opera called Noor.

This show, dubbed in Arabic, was first broadcast last year by MBC, a Saudi-owned satellite network viewed across the Arab world. The message is interesting, not one the Arabs are generally used to, cantering around the adventures of an emancipated modern woman. But for women throughout the Middle-East and North Africa that is not the main issue, no, the main issue is a blue-eyed blond former male model who goes by the name of Muhannad. The other issue is a portrait of a marriage; for you see Muhannad is a ‘modern man’, one who even does the dishes!

The bliss of this ideal throws the reality into a distressing contrast. Noor, it is said, is responsible for a rising number of divorces in the Arab world, as women compare Muhannad with their own husbands. In Jordan one woman was divorced after her husband found his picture on her mobile. It gets worse. In Syria another divorce was occasioned after a wife announced to her husband that “I want to sleep with Muhannad for just one night and then die.” :-))

Not surprisingly this trend has caught the attention of the Saudi religious establishment. The Grand Mufti has called for a boycott of the Turkish series, describing it as ‘evil.’ But MBC knows a good thing. Not only does Noor continue but it has obtained the broadcasting rights to other Turkish television dramas. This is how revolutions are made, by popular culture rather than grand politics. It was West German TV that brought down the Berlin Wall as much as anything else. Perhaps the Turks will bring their Muslim cousins right into the modern age, the age of Noor and dishy Muhannad.
Posted by Anastasia F-B at 16:49