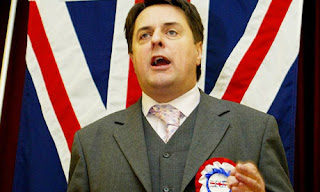 For the first time ever I visited the racist British National Party website; yes, I did. Why? Simply because I wanted to see if there was an official response to last week’s Question Time, a panel show in which Nick Griffin, their leader, appeared as a guest. Well, there was, a video with Griffin himself, which I imagine some of you who come here may have already seen. For those who have not it’s really quite interesting, quite revealing. He says a lot about how badly he was treated, how awful the BBC is; he says far more, albeit unintentionally, about his character. For, you see, big boys do cry, big boys do cry!

What more is there to be said on this particular subject? Well, let me see now, perhaps I can surprise you. But before I go on let me just quote a passage from Stopping Hitler, a piece I wrote earlier this year. This is how I concluded;

Violence will not stop the BNP, oh no it will not; only words will. And the words I have in mind are their own. Yes, I would allow a platform for Fascists for the simple reason that once people at large know just how simplistic their words are it will collapse from under them. That is the intelligent deduction, not the ‘lesson of history.’

So, I turned to Question Time to look not just for words-the words idiotic Peter Hain would not have allowed us to hear-but for image, for presentation and, to be honest, for a spot of good old-fashioned charisma. What did I see? Why, there he was, the Leader himself, a desperately silly little man: he was grinning inanely, he was nervous, he was trying to ingratiate himself, with his fellow panellists, the audience and the world beyond. He did not even seen to understand just how badly matronised he was by Bonnie Greer, sitting next to him. It was comically embarrassing in a way I had never expected. The figure who came to mind was not Roderick Spode, P. G. Wodehouse’s comic fascist; no, it was Uriah Heep, creepy and ever so ‘umble. Add to that the words, the words, oh, the words. Death by television, it’s the only way I can describe it. What a favour Peter Hain and the Unite Against Fascism rent-a-mob would have done him if the programme had been pulled.

Yes, he was ambushed, ‘lynched’, to use his own word, but in his position I would have expected a Spanish Inquisition. He, amazingly, did not. So, he fumbled over the most basic interrogation. He did not know why he had previously been a Holocaust denier-which he seemingly is no longer, he though the KKK was mostly ‘non-violent’ he himself is an ‘aborigine’ and so on and so wretched.

This was the Nick Griffin Show, as I previously suggested, but not in the way I ever imagined; he diminished by the moment, diminished by acutely painful degrees, painful for me to watch. He was destroyed not by the robustness of the questioning; he was destroyed by his answers, by his own words. This is not Hitler, this is not even Oswald Mosley; this truly is the fascist Mr Bean.

None of this takes away from the point that I’ve made before: that the BNP is a symptom, not the disease. It’s a symptom of the Labour government’s shameful neglect of its traditional constituency; it’s a symptom of the failure to address basic issues of social deprivation and fairness, it’s a symptom, above all, of the abject failure to control mass immigration. Nick Griffin was dreadful but Jack Straw, by his fumbled answer to this very point, was almost as bad.

It’s as simple as this: the BNP is a hard-core of fascists and racists surrounded by a ‘soft’ constituency of disillusioned voters; disillusioned with Parliament, disillusioned with government, disillusioned by the way their voice is ignored no matter how hard they shout. If a future government-a Tory government-addresses some of the issues that concern these people then I am convinced that they will turn away from the BNP with ever increasing rapidity. Few can truly be attracted to a bubbling wuss like Nick Griffin, hearing his denunciation of the ‘Marxist’ BBC as they turn to watch the dialectics of Strictly Come Dancing. I wonder how I could possibly write this because, as a white Londoner, I appear to have been ‘ethnically cleansed.’ :-))

Truly, those whom the gods wish to destroy they first make fascist.
Posted by Anastasia F-B at 16:47