Edward I of England, Joshua and Justinian 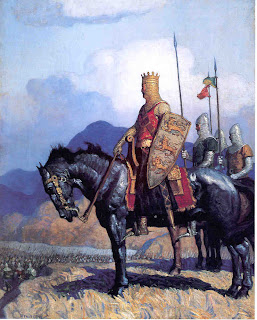 Edward I, king of England, was both law-maker and law-breaker; Justinian and Joshua! He was certainly a 'bully' when it came to dealing with the Welsh and the Scots, jealous in every way of his imperial and feudal rights. But he could also be quite overbearing when it came to his own subjects.

At the beginning of his reign, determined to restore some of the rights of the crown eroded during the reign of Henry III, his politically inept father, he instituted a series of legal inquiries, known as Quo Warranto. By this he challenged holders of liberties, particularly those with jurisdictions, like that enjoyed by the Palatinate of Durham, to prove that they held these by legal title. These investigations were a source of much friction, and Edward was compelled to modify his legal offensive in 1290 under political pressure from his barons. But it also provides an insight into the lawyer-like and nit-picking mentality with which Edward doggedly pursued the prerogatives of the crown, a clue to his later attitude towards his feudal superiority over Scotland.

So, yes, he was something of a single-minded bully, without a great deal of interest in constitutional niceties. Yet consider this: in 1275, not long after the beginning of his reign, he wrote to the Pope, explaining that he could do nothing concerning the power of the crown without "consulting the magnates and the prelates." It was during his reign that Parliament began to be a regular feature of the English political landscape. In the summons for that of 1295 it was announced that "What touches all should be approved by all.", meaning that taxation could only be granted by consent, one of the great founding principles of English constitutional law. It was during this time that the census known as the Hundred Rolls was taken, the first comprehensive survey of English property rights since the earlier Domesday Book. As a result, the law was further refined in the Statute of Westminster, and other law codes issue subsequent to this document. So, here is the English Justinian!

In ever sense, therefore, Edward was the perfect feudal lawyer; therein lies his strength, and therein lies his weakness. For his notions of what was right were often so narrowly defined and pursued with a single-minded purpose, regardless of the political damage caused, and with hidden costs to the crown. Unlike his father, he was a good soldier; but his conquest of Wales, and the attendant castle building, was ruinously expensive.

It would have been wise to consolidate and pause for reflection, but the vacancy of the Scottish crown following the death in 1290 of Margaret opened what was to be known as the Great Cause. It was, perhaps, the defining moment of Edward's reign, confirming that jealousy of privilege and title that marked the outset of his reign in England. He came to Scotland as a lawyer, and as a bully; and he fought his wars in Scotland as a lawyer, and as a bully. You see-and this is a point that is often overlooked-Edward never, at any point claimed the crown of Scotland for himself: he simply fought to maintain his position as feudal overlord, granted to him by the Scots in 1292. Even in 1305, when the conquest seemed to be complete, Edward produced Ordinances for the government of Scotland, of which he is Lord, not King.
Posted by Anastasia F-B at 17:00