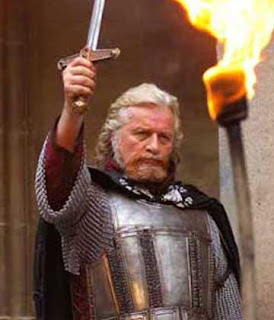 When Barbarossa begins the world will hold its breath and…yawn!

It has begun, though I suspect it’s not the Barbarossa that you are thinking of, the Barbarossa invoked by my opening sentence. It is, rather, an all Italian production, a cinematic epic released under the title of Barbarossa (Red Beard), the name once given to Frederick I of Hohenstaufen, king of Germany, king of Italy and Holy Roman Emperor, who reigned in the twelfth century. But the real hero of the movie is one Alberto de Giussano, the Milanese blacksmith who, according to legend helped defeat the Imperial forces at the Battle of Legnano. Alberto is the hero because he just happens to be the symbolic figure favoured by the Northern League and by its leader, Umberto Bossi. And hereby hangs a tale.

The Northern League is best envisaged, if you can picture such a thing, as a kind of combination of the British and Scottish National Parties. Bossi and his followers, who dream of an independent state in Northern Italy to be called Pandania, have a racist antipathy to the peoples of the south, so much so that they recently threatened to form a human chain along the line of the River Po to keep out further migration northwards. But this does not stop Bossi being a chum of Silvio Berlusconi, the Prime Minister, and it does not stop him from having a seat in the Italian cabinet.

Having Berlusconi as one’s Padre padrone carries other rewards, not least of which is access to funding for favoured cultural projects; and the one project most favoured by Bossi was Barbarossa: he even managed to get a bit-part. However, this celebration of ‘northern pride’ which features such international stars as Rutger Hauer as Frederick, and Céline Cassel, a French actress, as the Empress Beatrice, is turning into a cinematic disaster, the occasion for a fresh political storm. Only in Italy!

The problem is, you see, there are simply not enough ‘Pandonians’ to make Barbarossa a going venture, and those there are clearly prefer other things. In the opening weekend it took only 441,000 Euros at the box office compared with 1.8 million for Tarantino’s Inglourious Basterds. Last week L’Espresso was suggesting that Bossi’s baby might turn out to be the biggest flop in the history of Italian cinema. Even in Erba in Lombardy, a stronghold of the Northern League, only a handful of members showed up for the opening night, prompting the local paper to say, “If the Lombards don’t go and see it, who will?”

Rai, the state television network, which partially funded the project, is also committed to showing it as a two-hundred minute mini-series. Here Berlusconi was the decisive influence in securing funding and support, telling a Rai manager, whose phone had been tapped in a corruption investigation, that “Bossi is really on at me…about this Barbarossa.” Yes, Prime Minister!

Would you like to know something about the movie itself? Well, The Observer reports that when one Roman cinema-goer was asked about his impressions he replied;

With the swirling violins, the fighting and the constant cries for liberty, it’s like spending two hours inside Bossi’s brain.

It may be that, in the light of past usage, the very name Barbarossa may now be said to carry the same curse of misfortune as…the Scottish Play. :-)) 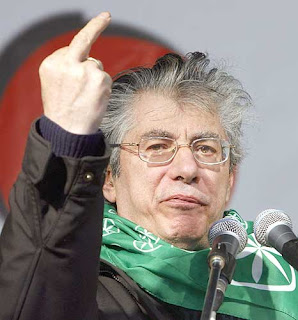