The Death of Horst Wessel 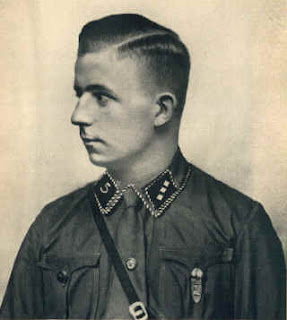 If you know anything at all about Horst Wessel it’s probably only because he wrote the Nazi Party marching song named after him. He was murdered in 1930 in Berlin. The KPD, the German Communist Party, may have denied its involvement, but the full facts came out during the trial of Albrecht Höhler. Although the Communist Party did not officially ‘approve’ of assassination it was a tactic they indulged in quite freely.

These are the facts as I understand them. Wessel's landlady, Elisabeth Salm, was anxious to get rid of him and his girlfriend, Erna Jänicke. Salm's former husband had been a member of the Rotfrontkämpferbund, the Communist equivalent of the Sturmabteilung, and it was to them that she went to for assistance on the evening of January 14, 1930. Her appeal was well-received, because Wessel, the leader of Sturm 5, an SA section, in one of the roughest neighbourhoods of eastern Berlin, had been a source of considerable annoyance. The party had even published 'wanted' posters, though no action was taken because they did not know his exact address. With Salm's appearance they now did.

The group that went to Grosse Frankfurter Strasse that same night, where Wessel had his lodgings, consisted of Erwin Rückert, the leader of the second Bereitschaft of the RFKB, his deputy, Albrecht or Ali Höhler, a career criminal with some sixteen convictions, including one for pimping; Sally Epstein; Max Jambrowski, who told Salm that they were going to give Wessel a 'good proletarian hiding'; Joseph Kandulski, Max Zieger and half a dozen others. When they arrived at the apartment Epstein and Zieger were posted outside as sentries, while Ruckert, Höhler and the others climbed the stairs. When Wessel answered the door he was shot in the face by Höhler.

Soon after the incident the local headquarters of the KPD started to spread the story that it had simply been a quarrel between 'pimps' over the affections of Jänicke. Heinz Neumann, the propaganda chief, warned Rückert and his troop that if any of them revealed the truth they would be treated in the same fashion as Wessel. Ali Höhler, the weak link, and now a major source of embarrassment to the Party, was given financial assistance from Roter Hilfe, a Communist aid organisation, to escape to Prague; but once there he was simply dropped. Unable to support himself he returned to Berlin in early February, where he was soon arrested. During his trial, angered by his treatment, he denied the official KPD line. His accomplices were all arrested and also sentenced to prison terms.

After the Nazi seizure of power in 1933 Höhler was murdered by the SA (not the Gestapo, as commonly said). Zieger and Epstein were re-tried and sentenced to death and all of the others sent to concentration camps, including Elizabeth Salm, who died at Belsen in 1945.

I’m posting the song below for the record.