Living in the Past; the Illusions of Vladimir Putin 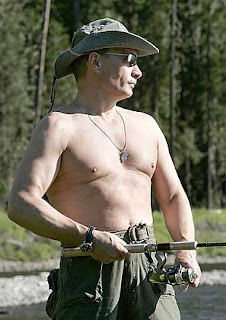 Russia is a proud country with a proud-and tragic past. It is also a country deeply uncertain of itself, uncertain of its future, uncertain exactly where it wants to go. At the moment, under the guidance of Vladimir Putin in the office of Prime Minister, it is drawing continually on historical capital to bolster its self-image, to overcome a deeply rooted sense of inferiority. And some of that capital is not particularly attractive. Stalin, once again, is a great leader, and authoritarianism, not democracy, the prevailing political fashion.

There is also a growing trend in political advertising, that if you say something loud and often enough it might very well be true. One billboard put up recently, depicting a frigate on the ocean, carries the message “Russia is a great superpower.” All of this, these forms of historical and political assertiveness, is, in fact, a symptom of a deeper malaise. For, you see, Russia is dying, literally, not metaphorically.

Yes, I know that this is a bold and alarming statement, one that really requires some substantive support. I’ve been reading a piece by Ben Judah in the latest issue of Prospect (Putin’s empire strikes out), in which he lays out some alarming facts. Russian GDP, for example, slumped by 10.3% in the last quarter, and is now lower than that of Brazil. Life expectancy is lower than that of Pakistan. The average Russian male, moreover, dies at the age of fifty-nine, significantly younger than that of China. The overall population is now lower than that of Bangladesh, with terminations now outnumbering live births. This confirms the projections made two years ago by the UN that by 2050 the Russian population could fall by a third. The decline of the ethnic Russians stands in sharp contrast to the rise in the Muslim population. In panicked reaction to this the Orthodox Church has said that Muslims may outnumber Christians before the end of the century.

The ‘greatness’ of Russia, the mantra of Putin, is based not just on a withdrawal of past capital; there is also a mortgage on the economic future. The swell in Russian power over the last few years has been shaped not by any deep economic strength but by the continuing exploitation of oil and gas reserves. The resources accumulated have been channelled into the ‘Putin Plan', a form of economic neo-Stalinism, vast projects with little in the way of practical results. According to Nikolai Petrov, a former government advisor, the state only has enough money to continue like this for another twenty months at the outside without reforms.

What Russia needs above all is open and rational debate on all of the problems it faces, a debate that will allow finite resources to be directed with greater efficiency, not frittered away on an empty imperial project, one governed by the illusions of the past. But under the Putin system of ‘managed democracy’ open debate is a highly unlikely prospect. So, caught, in the net of his own self-deceptions, he is likely to take the country into ever faster cycles of decay.

It gives me no pleasure to write this because in a way I quite admire Vladimir Putin. He deserves every credit for lifting Russia from the chaos of the Yeltsin years, giving it a new sense of itself, a new sense of its place in the world, a reminder of its place in history. But what was once the solution is now the problem. I wrote in a previous blog that the new ‘Time of Troubles', paralleling the crisis of the early seventeenth century, might not yet have ended. It’s obvious to me now that Vladimir Putin is not Michael Romanov.
Posted by Anastasia F-B at 16:35