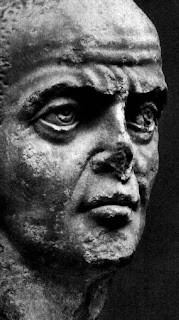 Many of the Roman emperors are worthy of note, including Marcus Aurelius, my personal favourite, and Julian the Apostate, who fought a tragic rearguard action on behalf of the old religion, being overwhelmed by the new faith. I would, however, like to make special mention here of Diocletian, arguably the last truly great pagan emperor.

So, why Diocletian, what makes him any more significant than, say, Trajan or Hadrian? It is simply this: the empire established by Caesar Augustus, properly known as the Principate, was an uneasy compromise between absolutist and republican ideals. The emperor himself was only considered to be primus inter pares-first among equals-and Rome was still nominally governed on the same basis since the last king had been expelled.

The system worked up to a degree, but only insofar as there was a degree of stability and consensus over the difficult issue of succession. The most stable period of all came in the second century, when a succession of ‘good’ emperors adopted the most able candidates they could as a potential successor. But this could not last. In the third century not just the Principate but the empire itself came close to total collapse for a variety of reasons, not least of which was the inherited structural weakness. Now any ambitious general, with a few legions behind him, thought he had as much right to rule as the emperor ion Rome. Anarchy and civil war were almost continuous from the murder of Alexander Severus in 235AD onwards. It was Diocletian who brought the whole crisis to and end.

At first he appeared as just another strong man, a bit like Aurelian before him. But he quickly recognised that the problems of the empire were, first and foremost, political in nature. The emperor, he concluded, should no longer be seen as ‘one of us’, even as primus inter pares; the emperor had to stand above all. In place of the Principate came the Dominate, with the emperor as an absolute and semi-divine figure. It was a system of government which was to evolve in a fully mature form into the Byzantine Empire.

Constantine may have been the ultimate beneficiary of these changes but the true honour belongs to Diocletian, who thus stands alongside Augustus as one of the two great architects of Imperial rule.

I was hoping to say a word or two about the Diocletian Persecutions, but this is getting too long. I’ll leave that for another blog. :)