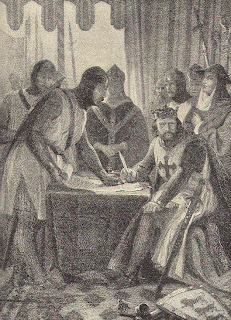 Let's strip away the verbiage and get to the heart of Magna Carta, the one core principle that might be said to have survived all others, not for a particular few but for everyone. It is this;

No free man shall be taken or imprisoned, or dispossessed or outlawed or exiled or in any other way ruined, not will we go or send against him except by the lawful judgement of his peers or by the law of the land.

This is now at the centre of our common law; but it is more than that. It sets limits to royal power, and is thus the first clear challenge to absolutism, a challenge renewed time and again.

Yes, the Charter was overturned almost immediately, but as a set of ideas it did not go away, and was reissued in 1217 and again in a more definitive form by Henry III in 1225. Even the Battle of Evesham, and the defeat of the baronial rebellion, did not shift Magna Carta from its central position in the political life of England. During the reign of Edward I it was used to focus opposition to the king's financial exactions. Edward was thus obliged to acknowledge that he was bound by its provisions. When Parliament began to take shape as a permanent part of the English political landscape it took it upon itself the task of seeking reconfirmation and clarification of the document. Often sessions would begin with a public reading and a reaffirmation of the Charter.

So, how did this work in practice? It meant that all statues conflicting with this political keystone were declared invalid. In 1369, during the reign of Edward III it was declared that "If any Statute be made to the contrary it shall be holden for none." The provisions of the Charter were also extended during this reign in the so-called 'Six Statutes', which served to define law as 'due process.' The third of these extended the protection offered by Magna Carta by changing the wording 'no free man' to 'no man'.

Although it slipped into the background to some degree during the period of Tudor absolutism, it became a central platform in the seventeenth century opposition to the rule of the Stuarts. And here we enter the realm of the 'ancient constitution', as defined by Sir Edward Coke, amongst others, later to find its fullest expression in the Declaration of Rights after the Glorious Revolution. It makes no matter here that we are dealing with what was effectively evolving political mythology, a useful adjutant to the Whig interpretation of history, King John's Charter had ramifications well beyond its limited feudal origins. In one of history's many ironies it was the Tories in the eighteenth century who rallied behind Magna Carta in their defiance of the Whig oligarchy, forcing Sir Robert Walpole to stress the superiority of the post-1688 constitution.

But for many, in both England and the American colonies, Magna Carta was reinterpreted as a challenge to narrow parliamentary absolutism. One radical, Arthur Beardmore, arrested for seditious libel in 1762, arranged to be apprehended while teaching Magna Carta to his young son, becoming a hero in the process, the subject of a popular print. John Wilkes, likewise imprisoned for seditious libel, also invoked Magna Carta, "that glorious inheritance, that distinguishing characteristic of the Englishman."

While it is true that the Charter, and the mythology of the 'ancient constitution', became less and less relevant during the great age of Victorian reform, it acquired a fresh significance across the Atlantic. The 1225 version of the Charter was published in Philadelphia in 1687, part of a tract written by William Penn. After the outbreak of the American Revolution in 1775, lawyers turned to Magna Carta to justify Colonial defiance of George III, the new King John. The First Continental Congress declared that the colonists were doing "as Englishmen their ancestors in like cases have usually done, for asserting and vindicating their rights and liberties." In 1775 Massachusetts adopted as its state seal an image of a patriot holding a sword in one hand and Magna Carta in the other; and the Founding Fathers went on to place the document above statute law in the Constitution. Due process was also to be incorporated in the Bill of Rights of 1791.

So, you see, Magna Carta has a historical relevance well beyond defining the selfish rights of thirteenth century barons.
Posted by Anastasia F-B at 16:32