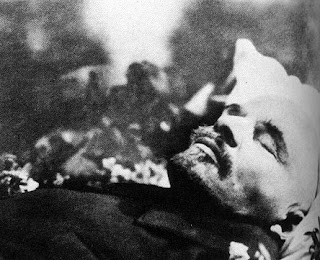 Lenin died from syphilis caught from a Paris prostitute. At least he did according to Helen Rappaport, a historian and author, who makes this claim in her recently published Conspirator, Lenin in Exile.

According to the official statement made at the time by the Soviet government, Lenin, aged fifty-three, died as a result of a stroke, the last of three. Rappaport bases her claim on one core peace of evidence, an assertion by Ivan Pavlov, he of the dogs, made in 1928, four years after the dictator’s demise, in which he says that the “revolution was made by madman with syphilis on the brain.” She goes on to say that the evidence is that Lenin caught the disease in 1902. It was the unspoken belief of the Kremlin doctors that this was the true cause of his death;

Pavlov knew the scientists who had been called to examine Lenin’s brain after his death in 1924 and they all concurred in this diagnosis.

This seems to me to be really thin stuff. All she has is this uncorroborated statement, made by Pavlov to one Mikhail Zernov, a fellow doctor, while they were both in Paris. The conversation was recorded in a document now held by the University of Columbia in New York. I imagine Pavlov felt secure enough, out of Soviet ears, to confide in such a fashion. He also, as a scientist and Nobel laureate, carried some unique privileges not granted to others, including, one suspects, the privilege of unorthodox views.

I know almost nothing about Pavlov’s views beyond his immediate areas of intellectual concern, but the words, the form he uses, seems to suggest a certain degree of political bitterness. Russia was on the threshold of the most traumatic period in its modern history, the forced collectivisation and the Great Purge, in which some of the scientist’s own colleagues were caught up. Pavlov may have privileges but the world of objective scientific inquiry was closing down. It was not Lenin who was mad; it was the Revolution itself, a collaboration of political gangsters.

I know how historians work and it seems to me that Rappaport has been carried away by her excitement in finding original ‘evidence’ divorced of context. Besides, and I have to say this, I simply can’t imagine the cold-blooded Lenin as a sexual being at all, can’t imagine him doing anything as lowly and human as visiting a prostitute.
Posted by Anastasia F-B at 16:25