I have little doubt now that the Lisbon Treaty will be ratified on this side of a general election. Czech resistance is nothing more than a mirage. It gives me little pleasure to write this. I cannot but agree with a recent statement in The Economist that the treaty is being driven through despite having been rejected by three out of a total of six referendums, with ten governments reneging on promises to hold votes of their own, a process which is, in their words, ‘deeply shabby.’ There is democracy and there is the European Union: the two will never meet.

Still, there is some comfort to be taken. The silly political porridge cooked up at Lisbon is an end, not a new beginning, like so many previous European treaties. More than that, the whole campaign for ratification turned into a lengthy war of attrition. The outcome is no more than a Pyrrhic victory for the federalists, which has left them well short of their goal, too exhausted to fight on. Put it another way: we will never all stand up for The Ode to Joy. Sad to say I truly hate that now, both the words and the music.

What we may very well have to stand for is the onward march of the Blair President Project. In the scramble for this office he is likely to ‘emerge’ in the way that a new Pope emerges, after Europe’s twenty-seven cardinals have considered how worthy his holiness is likely to be. He is likely to be chosen because he has a profile on the world stage which the other potential candidates, all mediocrities, do not. I personally cannot imagine anyone less worthy…unless it’s Gordon Brown. We know Blair; the Europeans do not; we have the exact measure of this shallow, mendacious and morally bereft individual; a man who took my country into one of the least-justified wars in our history. I said in a recent discussion here that I would stop short of calling him George Bush’s poodle, because even poodles have some dignity.

But I suppose none of it really matters; because in the absence of further integration, President Blair, and his future successors, are likely to have no greater dignity than chairing meetings, much as at present, though for a longer term of office. As for speaking for Europe ‘as a whole’ just imagine the jealousy and back-stabbing of all those national governments, those real prime ministers and presidents, those cardinals and potential anti-Popes. It should soon be apparent to the rest of the world that Blair-should he succeed-is little better than a cat herder. This is a rather an apt destiny, I think, for an individual who always reminds me of the Cheshire Cat. In the end nothing will be left but the grin. 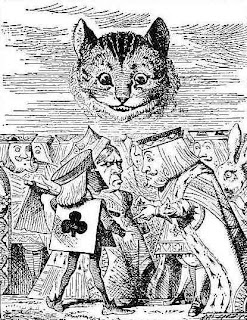