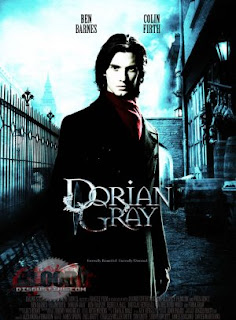 I saw Dorian Gray recently, a movie directed by Oliver Parker and based on The Picture of Dorian Gray, the only novel of Oscar Wilde. It’s not bad; it’s just not that good. Colin Firth is super as Lord Henry Wotton, the hedonist and wit who cuts life to pieces with his razor-sharp epigrams, oh, but Dorian himself! He is played by Ben Barnes, a really yummy guy, chosen quite clearly for his looks rather than his acting ability. As one review I read put it, Barnes is “tall, dull and handsome.” The screenplay itself, written by one Toby Finlay, lurches from the darkly entertaining to the outright ridiculous.

The novel caused a great fuss when it was first published, being seen as an example of literary decadence. But it’s really quite a moral book, almost to the point of being a kind of parable on the consequences of a life pursued solely in the pursuit of selfish pleasures. Dorian has his portrait painted by his friend Basil Hallward (played in the movie by Ben Chaplain) while in the presence of Lord Henry. When he sees the finished product he despairs, realising that the image of beauty will always remain the same while the real man will age and wither. He wishes for the reverse and his wish, by some trick of fate, is granted. Time passes and all signs of change, all signs of the sin he immerses himself in, show in the painting, not in Dorian, who remains the same, young and beautiful. The painting in essence is a depiction of his soul: it shows the steady corruption of his soul.

And now for the movie. If you have read the novel, if you love the novel, it’s probably best avoided; for it’s not just the portrait that’s corrupted! I don’t wish to be entirely negative. As I say, Colin Firth is an excellent Lord Henry, though writer and director take astonishing liberties with his character. Parker, fair to say, creates a very convincing Victorian London, partially by means of special effects. Overall, however, the movie is nothing but a rather shallow gothic horror, losing all the subtlety of the novel.

We see Lord Henry at the outset almost as Mephistopheles to Dorian’s naïve Faust. Indeed, one gets a feeling from a look in Firth’s eye that it is he who curses Dorian with the ‘gift’ of eternal youth. But by the end, in a chapter of the screen-writer’s invention, he turns into a protective father, determined to keep Dorian, a product of his own corrupt influence, away from his daughter; yes, he has a daughter. Oh, no; this kind of man is not for daddy’s little girl!

This is a movie where even the portrait has a life, part satyr, part werewolf clearly trying to jump free from the canvas. The novel ends with Dorian, who murdered the artist long since, hoping to recapture his virtue by stabbing his debased image, but in doing so the process is reversed: he dies aged and horrible as the picture returns to pristine youth. But the movie ends hilariously with Lord Henry rushing to the rescue of his daughter (played by Rebecca Hall), while Dorian, locked in the attic with the painting, is blown up in a gas explosion. In the end we see Lord Henry with the painting, which miraculously survived the inferno, in his own home. There are some things one would rather forget. :-)
Posted by Anastasia F-B at 15:58