Suicide in Greece and Rome 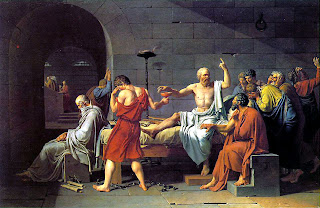 To begin with consider the example given by Titus Livy of the colony of Massalia, the present day Marseilles, where those who wanted to kill themselves merely applied to the senate, and if their reasons were judged sound they were then given hemlock free of charge!

In general the pagan world, both Roman and Greek, had a far more relaxed attitude towards the whole concept of suicide, a practice that was only finally outlawed with the advent of the Christians, who condemned it at the Council of Arles in 452 as the work of the Devil.

There is, however, some echo of later Christian hostility in earlier pagan thinkers. Pythagoras, for example, was against the act, though more on mathematical than moral grounds, believing that there was only a finite number of souls for use in the world, and that the sudden and unexpected departure of one upset a delicate balance. Aristotle also condemned suicide, though for quite different, far more practical reasons, in that it robbed the community of the services of one of its members.

A reading of Phaedo suggests that Plato was also against the practice, inasmuch as he allows Socrates to defend the teachings of the Orphics, who believed that the human body was the property of God, and thus self-harm was a direct offense against divine law. Yet, it's not quite so simple, because after Socrates says than no man has a right to suicide, this is then qualified by the statement "...unless God sends some necessity upon him, as has now been sent upon me." After all, let's not forget that Socrates himself was a suicide, perhaps the most famous in history!

In Rome suicide was never a general offence in law, though the whole approach to the question was essentially pragmatic. It was specifically forbidden in three cases: those accused of capital crimes, soldiers and slaves. The reason behind all three was the same-it was uneconomic for these people to die. If the accused killed themselves prior to trial and conviction then the state lost the right to seize their property, a loophole that was only closed by Domitian in the first century AD, who decreed that those who died prior to trial were without legal heirs. The suicide of a soldier was treated on the same basis as desertion. If a slave killed her or himself within six months of purchase, the master could claim a full refund from the former owner.

But the Romans fully approved of what might be termed 'patriotic suicide'; death, in other words, as an alternative to dishonour. For the Stoics, a philisophical sect which originated in Greece, death was a guarantee of personal freedom, a way out of an intolerable existence. And so it was for Cato the Younger, who killed himself after the Pompeian cause was defeated at the Battle of Thapsus. This was a 'virtuous death', one guided by reason and conscience. His example was later followed by Seneca, with as much courage and virtue, though under somewhat more straightened circumstances.

A very definite line was drawn by the Romans between the virtuous suicide and suicide for entirely private reasons. They disapproved of Mark Antony not because he killed himself, but that he killed himself for love, a very un-Roman thing to do!
Posted by Anastasia F-B at 15:56