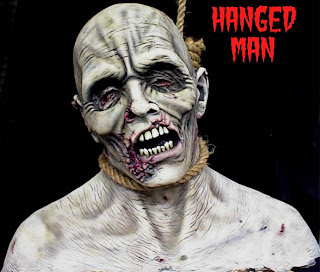 I’ve picked up some interesting, darkly humorous, snippets of information from an article by Stacey Hynd of Exeter University in the latest issue of the Journal of African History. Headed Killing the Condemned it deals with the administration of capital punishment in British colonial Africa.

Although public hanging was banned in Britain in 1868 colonial administrators retained the practice for as long as they could, holding to the principle that in Africa justice must be seen to be done. When they finally gave way to pressure from London predicted results followed. Local superstition meant that people did not believe the condemned to be dead, not having seen them die. Instead they were assumed to have been protected by magic or even turned into hyenas. These kinds of belief were so prevalent that the British had to co-opt people from the condemned man’s village to witness the hanging.

Surprisingly the regime of the condemned was remarkably relaxed. They were even allowed to mix with the general population. In one case a condemned man in Rhodesia in the 1930s was allowed to work as a gardener for some eighteen months prior to his execution. He was well-liked by his fellow prisoners, who had no idea that he was under sentence of death, though he was a very bad gardener. When he was finally hanged the prison authorities were surprised they could get no volunteers to fill the vacancy. On further investigation they discovered that it was believed that he had been executed because of his inferior abilities in the garden!
Posted by Anastasia F-B at 17:19