Love, too, has to be learned 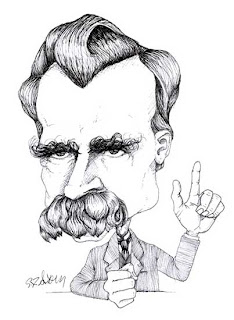 In The Joyful Science Nietzsche says that “Love, too, has to be learned.” This puzzled me to begin with until I understood he was comparing love to music. Yes, the passage in question is really beautiful. It is also part of his general critique of knowledge, a tribute to the great Spinoza, who said that the act of knowing is an act of laughing, an act of mourning and an act of cursing. Nietzsche took this one stage further, saying that the act of knowing was an act of love. Love here has to be understood in a transcendent sense, a seeking after the unknown, the true Science of Joy, with knowledge itself as desire. It's Zarathustra's ecstasy in the bedding of the night.
Posted by Anastasia F-B at 16:41