Ireland, as expected, has voted yes to the Lisbon Treaty. I am pleased for the Irish people, pleased that they at least had a chance to vote, ‘wrong’ the first time and ‘right’ the second, at least from the perspective of the Eurocrats. I can’t deny-no reasonable person could-that the Irish had good reason to change their collective mind in so decisive a manner. After all, Ireland is a small country perched on the edge of the Continent; a small country, moreover, uncertain of its future: for the day of the Celtic ‘tiger economy’ is over. The country is more dependant than ever on largesse from Brussels. I would not go so far as to say that the Irish were frightened, almost blackmailed into saying yes, but it comes close, oh so close.

Still, there were other issues at stake here, issues beyond ‘the economy, stupid’, not least the issue of national self-respect and independence. The Irish know what it’s like to struggle for freedom; perhaps no nation in Europe, aside from Poland, knows better. Ireland had a longer experience than most of belonging to a wider union, one it finally freed itself from after a lengthy and bitter struggle. But small, free and independent nations no longer count for much in this world of big alliances and big government, of Oceania, of Eurasia and of Eastasia. So Ireland gave away a portion of freedom to the high table of Europe. I wonder what Wolfe Tone, Charles Stewart Parnell and Michael Collins would have made of this? I wonder what the Irish will make of President Tony Blair? Who would ever have thought that Strongbow was set to return in such a despicable shape. History really does have a wickedly ironic sense of humour. :-)) 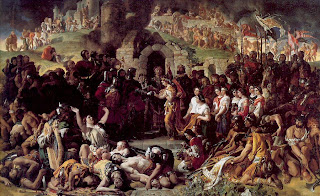