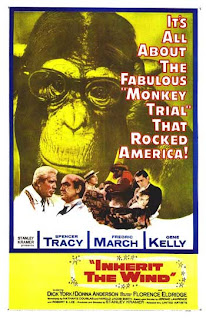 Most people are probably familiar with the Scopes Trial from the old Spencer Tracy movie Inherit the Wind. But the play on which it was based, written by Jerome Lawrence and Robert E. Lee (not that Robert E. Lee!) was not even about creationism, but the dangers of McCarthyism. Also, the movie seriously misrepresents the truth surrounding the whole affair. Dayton itself is depicted as stereotypical southern town, full of red-necked reactionaries, when it was anything but.

There were many people for whom the great fear was not the challenge to the literal truth of the Bible, but the advance of a particularly invidious form of Social Darwinism. The Tennessee law against the teaching of evolution theories in public schools was signed by Governor Austin Peay, who needed the support of the Christian vote for his re-election, but never thought the measure would be enforced. But there were various individuals and interest groups, including the American Civil Liberties Union, who wanted to push the matter in a test case, and John T. Scopes agreed to be cast in the role of the martyred teacher, in a highly contrived breach of the law. The text he used was A Civic Biology by one G. W. Hunter, which, amongst other things, puts forward the contention that the Caucasian race was 'the highest type of all.'

Perhaps the worst aspect of the movie is the misrepresentation of William Jennings Bryant-the 'Great Commoner'-who appeared for the prosecution. In truth, it was he who was the true progressive, not his opponent, Clarence Darrow, who appeared for Scopes. Amongst other things, Bryant, a three-time candidate for the Presidency of the United States, had supported votes for women, improved factory conditions, a minimum wage, the eight hour working day and a variety of other radical measures. His support for the Creationist cause was not as straightforward as imagined. He believed that Social Darwinism was being used to justify poor working conditions.

Darrow, in contrast, an enthusiast for Nietzsche, as well as Darwin, had the full backing of H L Mencken, a leading journalist, and also an advocate for Nietzsche and Darwin-The strong must grow stronger and that they may do so, they must waste no strength in the vain task of trying to lift up the weak.

Given these views, he hated both Bryant and his 'social conscience' style of politics. For him the whole trial an opportunity to humiliate Bryant and ridicule the South, telling Darrow that 'Nobody gives a damn about that yap schoolteacher.' Against such a background the actual outcome of the trial, which was a foregone conclusion, was irrelevant. It was, in the words of Garry Wills "...a nontrail over a nonlaw, with a nondefendant backed by nonsupporters. Its most famous moment involved nontestimony by a nonexpert which was followed by a nondefeat." (Under God: Religion and American Politics, 1990)
Posted by Anastasia F-B at 16:54