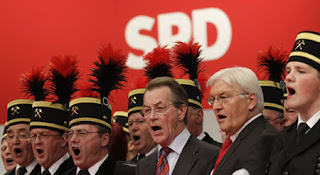 I hadn’t really given much thought to the recent German parliamentary election, and the victory of the worthy but dull Angela Merkel, not until a small but interesting fact was drawn to my attention by another blogger: the vote for the left-wing Social Democratic Party, the SPD, is the lowest it’s been since the early 1930s, since before the advent of the Third Reich. All they could manage was a lamentable 23% share, eleven points down from the previous election.

The decline in German socialism at a time of recession raises some interesting political issues. It’s yet another symptom of the crisis of the centre-left right across Europe, from Britain to Poland, as the conservative right continues to make steady advances. The recent poor performance of the SPD is particularly worthy of note. In 1930, at the end of another Grand Coalition, the party remained the principle voice of the left. Even when under serious threat from the Communist KPD its vote held up reasonably well. Now it simply seems to be dying, as the left-wing vote haemorrhages away, to the Left Party, a refuge for ex-Communists from the old German Democratic Republic, to the Greens and to the modish Pirate Party.

With the reconstitution of a right-wing coalition between Merkel’s CDU and the Free Democratic Party, the FDU, which secured its best vote ever, it’s possible that the Socialists may be in permanent opposition unless they can reach a deal with the extremists and faddists further to the left, which, of course, would mean reconstituting themselves, or rediscovering their ‘true identity’, as one party spokesman said. In that event, Deutschland erwache. :-))
Posted by Anastasia F-B at 16:36