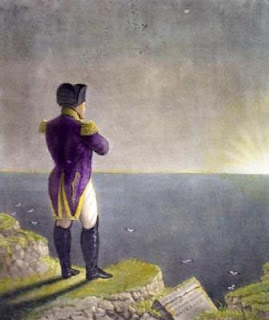 Ah, Napoleon on St. Helena, most definitely an island too far! When he was told by his British captors that was where he was bound he said "Go to St. Helena-no!-no! I prefer death" But to St. Helena he went. Lord Liverpool, the British Prime Minister of the day, explained the reasons for sending the troublesome Emperor so far from Europe-"There is only one place in the circuit of the island where ships can anchor...At such a distance, and in such a place, all intrigue would be impossible; and, being withdrawn so far from the European world, he would very soon be forgotten." But he was not forgotten, by the British least of all.

In exile, Napoleon set himself two tasks: to persuade his former enemies to grant his release, and to create an image of himself for future generations of Frenchmen, an image based on Christian concepts of martyrdom. He failed in the first but suceeded in the second, creating a myth that was to become the basis for the Second Empire. His memoirs were, in fact, a quite cynical exercise in political manipulation, and he went so far as to tell an aide "If Jesus Christ had not died on the cross, He would never have been worshipped as a God." He concluded his account of his career with an accusation and a plea "I am dying prematurely murdered by the English oligarchy and its hired assassins...I wish my ashes to rest near the banks of the Seine in the midst of the French people I have so dearly loved."

In a sense the creation of the 'Napoleon myth' was the Emperor's last great victory. Even the themes he anticipated were later taken up by his countrymen in a romantic vision that overlooked the tyranny and militarism of the First Empire. By 1840 he was being compared to Prometheus, chained to a rock (St. Helena), where his blood was drunk by the vulture of Albion;

Jesus by his strength
Saved the pagan, lost in sin.
Napoleon saved France;
Like Jesus he was sold
After odious sufferings,
Jesus died on the cross;
Napoleon at St. Helena,
Has suffered like Jesus.

In 1840 the singularly unheroic Louis Phillipe arranged for Napoleon's remains to be returned to France, to be re-interred at Les Invalides. Some 600,000 people watched the procession through Paris, with cries of Vive l'Empereur! and A bas les Anglais! While he was still alive, though, the chief preoccupation of the government of Louis XVIII was to ensure that he remained in the south Atlantic, and that there would be no repetition of the Hundred Days. The Duc de Richelieu, Louis' chief minister, even went so far as to ask his agent on St. Helena if the barrels leaving Napoleon's house at Longwood, were being checked! Some of the fear was justified, because there were indeed genuine plots to rescue Napoleon, including one from Brazil and another from Texas, where some four hundred exiled soldiers from the Grand Army dreamed of a resurrection of the Napoleonic Empire in America. Believe it or not, there was also a plan to rescue him using a submarine!

Despite his complaints and his petulance, Napoleon was not too badly treated by the British, and was more or less free to live his life in the manner of in English country gentleman in quite comfortable surroundings. When he was a boy, William Makepeace Thackery, the writer, stopped at St. Helena on a voyage from India. His servant took him to Longwood "We saw a man walking...'That is he', said the black servant, 'That is Bonaparte, he eats three sheep every day, and all the children he can lay his hands on.' " Napoleon received many visitors, to the anger and consternation of Richelieu "This devil of a man exercises an astonishing seduction on all those who approach him."

In a uniquely British way, Napoleon was transformed in the public mind from a monster to a hero, no doubt a direct expression of discontent at the reactionary post-war government of Lord Liverpool. In 1818 The Times, which Napoleon received in exile, in reporting a false rumour of his escape, said that this had been greeted by spontaneous illuminations in London. There was some sympathy for him also in the political opposition in Parliament. Lord Holland, the nephew of Charles James Fox, the former Whig leader, sent over 1000 books and pamphlets to Longwood, as well as jam and other comforts. Holland also accused the government of attempting to kill the Emperor by a proceess of slow assassination. Napoleon knew of this, and based his hopes for release on the possibility of Holland becoming Prime Minister, Richelieu's greatest fear.

Napoleon also enjoyed the support of Admiral Lord Cochrane, one of the greatest sailors of the age, closely involved in Chile and Brazil's struggle for independence. It was his expressed aim to make him Emperor of a unified South American state, a scheme that was frustrated by Napoleon's death in 1821. For Lord Byron, amongst others, Napoleon was the very epitome of the Romantic hero, the persecuted, lonely and flawed genius. At quite the other extreme, the news that Napoleon had taken up gardening at Longwood appealed to more domestic British sensibilities, which had the effect of humanising him still further. When news of his death reached Europe in early July 1821 the French Foreign Minister noted that this caused a far greater sensation in London than in Paris. Ironically, it was the British who were the first to adopt a myth, later exported to France, where tragedy was destined to be refashioned in the shape of farce.
Posted by Anastasia F-B at 16:47