Big Sister is Watching You 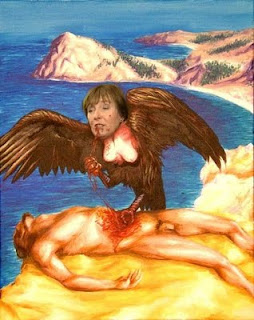 What will you remember of last week’s Labour conference? Indeed, do you remember anything, or is it all just a haze? How could one possibly forget Lord Rumba’s exercise in snake-charming, or the Joker’s plea in mitigation, marked by the total absence of the dropping jaw, or Sarah Brown’s defence of her poor benighted hubby, the most embarrassingly awful thing I think I have ever heard, delivered wearing the most embarrisingly awful dress I have ever seen. :-)) But for me only one thing really stands out: that moment when Tony Woodley, joint general secretary of Unite, the Brownie union, tore a copy of The Sun newspaper in half, no clearer indication that the sun really has gone down on the party. Sorry, I couldn’t resist that.

Now is the time for assessment and reflection, a time for understanding what really went wrong with the whole rotten socialist cruise, first on steam-ship Blair and then old tug Brown. Here I would commend Andrew Gimson’s conference sketch, published in The Telegraph last Thursday, the final day of the gathering of the dead. I said in my Balls and the BNP blog that the present regime can thank itself for one thing: the alienation of large sections the working-class and the attendant surge in support for the Nationalists. No surprise in this; for they have shamefully neglected these people for years, assumed that their vote was a ‘given’ while pursuing all sorts of policies irrelevant to their lives. But there is another side to this equation. It is to be found, as Gimson writes, in the face of New Labour itself; it’s to be found in the face of Harriet Harman.

Why her in particular? Simply because if the state needed a face for ‘Nanny’ it could find no better fit. It’s the face of the earnest middle-class ‘do-gooder’, a face far removed from Old Labour and all those who supported Old Labour-it’s the face of Big Sister. I don’t like the expression ‘chattering classes’ but how this dreadful person chatters! She spoke on the last day of the conference in her capacity as Minister for Women, telling those who would listen, “Equality is not just a slogan…it’s a way of life.” Well, that sounds pretty much like a slogan to me, worthy and vacuous. I don’t imagine this kind of thing goes down at all well in Salford or Hull, in the homes of Tracy and Kevin, unlike, say, ‘British jobs for British workers’. That particular one was taken, of course, from the BNP when Joker Brown, ‘the best man for the job’, found Nick Griffin bathing and walked off with his clothes!

There is a weird emptiness at this Labour conference. It lacks heart and soul because so many traditional Labour supporters have lost all faith in the party as it now exists: bossy, bourgeois and prudish and prissy with Miss Harman as the emblematic figure.

Isn’t this just so true? And remember this, Kevin and Tracy-Big Sister is watching you. 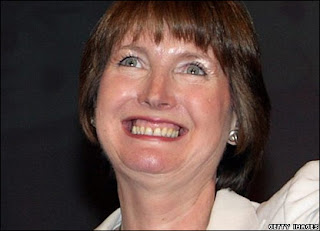