Karl and the Boar's Head 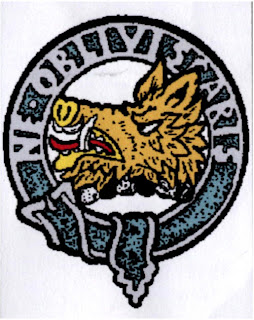 Well, here is a little tale that may serve to amuse: Karl Marx was related through marriage to the earls and dukes of Argyll, chiefs of Clan Campbell, whose crest was the Boar's Head, with the motto in Latin Ne Obliviscaris (never forget). His wife, Jenny von Westphalen, was the grandaughter of one Anne Wishart, a descendant of the Campbells.

When Karl and Jenny were married in June 1843 the wedding presents included a collection of jewellery and silver plate with the Argyll crest, a gift from the bride's mother, and part of a legacy from the von Westphalen's Scottish ancestors. Later, when the couple were living a penurious existence as political exiles in London, Karl tried to pawn the family silver. The police were alerted, and he was duly arrested, because they refused to believe that the scruffy German refugee could have acquired these ducal heirlooms legitimately. The great prophet of world revolution spent the night in the cells, before Jenny came to the rescue in the morning.

The Campbell connection also gave the down-at-heel Karl a very distant link with none other than Queen Victoria herself: for her daughter, Princess Louise was married in 1871 to John Campbell, Marquis of Lorne, the future 9th Duke of Argyll.