My Idea of Good Romantic Fiction 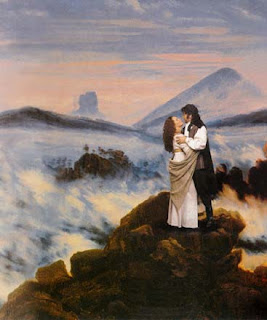 I suppose it really depends what is meant by ‘Romance.’ I hate soppy pulp fiction, I always have, but I adore high romance; romance as the most sublime form of literature.

Knut Hamson’s Victoria is one of the most beautiful love stories ever written. The ending came close to breaking my heart; I don’t think I’ve ever cried so hard over a book. But the love story that captivates me more than any other is that of Cathy and Heathcliff in Emily Bronte’s Wuthering Heights.

Alas, nobody-apart from me, that is!-seems to understand the elemental force that is Heathcliff. Cathy is his anchor; without her he is lost, blowing through the novel with all the unrestrained energy of a great tempest. Theirs is a mutual passion, with echoes of an ancient tragedy, which goes well beyond the cosy domesticity that Jane brings to Rochester in her sister Charlotte’s novel Jane Eyre. Charlotte did not understand the force of Emily's great novel, a work of unsurpassed genius, going far beyond anything she ever achieved; going well beyond the limits of the Victorian imagination itself.

We buried him, to the scandal of the whole neighbourhood, as he wished. Earnshaw and I, the sexton, and six men to carry the coffin, comprehended the whole attendance. The six men departed when they had let it down into the grave: we stayed to see it covered. Hareton, with a streaming face, dug green sods, and laid them over the brown mould himself: at present it is as smooth and verdant as its companion mounds - and I hope its tenant sleeps as soundly. But the country folks, if you ask them, would swear on the Bible that he WALKS: there are those who speak to having met him near the church, and on the moor, and even within this house. Idle tales, you'll say, and so say I. Yet that old man by the kitchen fire affirms he has seen two on 'em looking out of his chamber window on every rainy night since his death:- and an odd thing happened to me about a month ago. I was going to the Grange one evening - a dark evening, threatening thunder - and, just at the turn of the Heights, I encountered a little boy with a sheep and two lambs before him; he was crying terribly; and I supposed the lambs were skittish, and would not be guided.

'What is the matter, my little man?' I asked.

'There's Heathcliff and a woman yonder, under t' nab,' he blubbered, 'un' I darnut pass 'em.

For me Heathcliff and Cathy will walk those Yorkshire moors, hand-in-hand, forever.