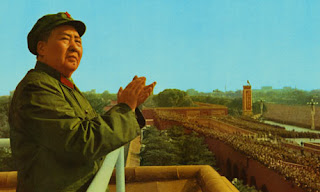 The beginning of the present month marked the sixtieth anniversary of Mao Zedong’s proclamation of the People’s Republic of China in Tiananmen Square, where his portrait still hangs. The celebration was a rather odd, topsy-turvy affair in a People’s Republic that is still afraid of the people. Most were told to stay away for fear of public disorder, only the specially selected being allowed to attend the usual tiresome display of rockets and tanks. Even those with homes overlooking the Square were told to keep their windows closed and not to invite friends over for parties. They were even forbidden to fly pigeons, seemingly because it was feared that they may have carried bombs. :-))

Yes, Mao looks down on the masses but the masses don’t look up to Mao. The government would like them to forget his legacy: forget the Great Leap Forward and the Cultural Revolution; forget the damage done to every area of Chinese life by the last century’s most repellant tyrant. Mao simply remains as a symbol, as empty as Chinese Communism itself, now no more a way of perpetuating the power of an oligarchy.

The changes in this country since his death in 1976 have been quite astonishing. Try to picture the Vatican acknowledging Jesus as the founder of Christianity while abandoning every single Christian concept, even notions of the afterlife. Try to picture Christianity without Christ and then you come close to understanding Chinese Communism after Mao, an idea without an idea. China, in every practical respect, is a capitalist country presided over by a hollow and meaningless dictatorship, not of the proletariat but of the functionary. It’s a capitalist country in a shape that might very well have been understood by the likes of Thomas Gradgrind and Josiah Bounderby, a ‘worker’s state’ where the workers have little in the way of rights or protection.

Even Marxism as a system of thought has gone, to be replaced by older Confucian concepts which place a stress on notions of ‘social harmony.’ It is not harmonious, in the eyes of the Party, to remind people of the past, of its past. But there are people, courageous people, people like Peng Qi’an, determined that some things should never be forgotten. In 2005, in the face of lengthy official obstruction, using his own funds he opened a museum of the Cultural Revolution in the city of Shantou. Of this he said;

It is my belief that we must learn the lessons of history or we will repeat our mistakes. But the Party does not agree. It does everything to create an atmosphere in which the people are encouraged to forget, even though of course everyone in China over 50 remembers the history perfectly clearly. The Party fears that if it truly opens up what happened it will undermine its legitimacy and bring instability.

The museum is there, though it’s almost impossible to locate as it does not appear in any official guide and is not allowed to advertise its presence. Still, little by little the truth wears away at the lies, not just in Shantou but over the rest of China. The past will never be forgotten; the role of the Communist Party in less ‘harmonious’ times will never be forgotten. Can there be anything hollower than celebrating power simply for the sake of power? 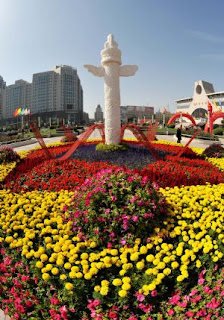