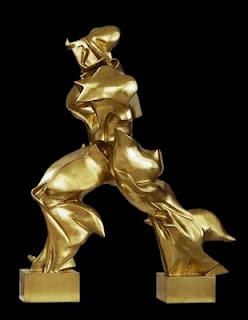 I wonder if anyone has every dipped into Filippo Marinetti's wonderful Futurist cookbook? It contains such meal plans as salami immersed in a bath; coffee flavoured with eau-de-Cologne; and for desert, pineapple and sardines! He once suggested to Mussolini that pasta be banned because it made the Italians lazy.

Futurism and Fascism are usually thought of as the terrible twins. But are they? Though he broke with Mussolini politically in 1920 Marinetti went on to support his regime, claiming that it had fulfilled Futurism's minimum programme. In 1929 he even became the secretary of the Fascist Writer's Union, and remained loyal to Mussolini up to his death in 1944. But the link between Futurism as an art form and Fascism as a political style only really holds true at a superficial level. Look at the manifesto of the Futurist party which Marinetti published in early 1918, calling for the eight hour day; equal pay for women; expulsion of the Pope and the King from Italy; nationalisation of land, to be distributed among war veterans; high taxation on wealth; easy divorce and free love. Not much in the way of Fascist ideology there!

Marinetti, a great self-publicist, but not much of a politician, joined Mussolini in the formation of the Fasci italiani di combattimento in March 1919, though, as the movement grew, the Futurists remained a small and isolated element. More than that, some of his clownish antics, like the so-called 'Battle of Via Mercanti', did more harm than good to the emerging movement, which was almost destroyed in the elections of November 1919.

The kind of direct action, the energizing myth favoured by Marinetti was bringing Mussolini no political benefits whatsoever. What did was the emergence in 1920 of rural Squadrismo, a reactionary force that represented everything that Futurism did not. It was this turn towards rural conservatism that caused Marinetti to resign from the party in a mood of disgust. Of this Mussolini said that Marinetti was "an eccentric buffoon who wants to play politics and whom no one in Italy, least of all me, takes seriously." Fascism was carried to power on a wave of brutish reaction, not in a Futurist carnival. 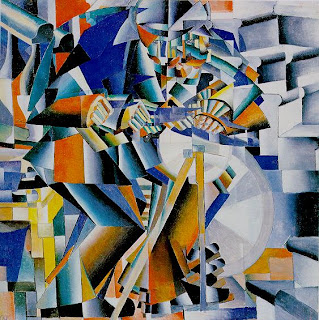