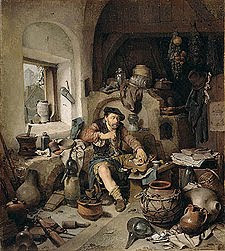 Another fascinating discovery of mine, the story of Thomas Charnock, an alchemist and magus from the Tudor age!

I garnered what follows from The Occult Philosophy in the Elizabethan Age by Frances Yates, Mystic Metal of Gold: Essays on Alchemy and Renaissance Culture edited by S. Linden. There is also a useful article entitled Base Matter into Gold by Jonathan Hughes in the August 2005 edition of History Today. Hey, I even dipped into Charnock's own notes! For those who have neither the time nor the inclination for this then there are some pertinent extracts in Alchemical Fragments Copied from Thomas Charnock's Own Handriting by Elias Ashmole.

Charnock was born in about 1524 and died in 1581. He spent most of his life in Comberwich, a small village near the port of Bristol in the west of England. His unpublished notebooks are useful, not just for an understanding of Elizabethan attitudes towards alchemy in general, but for the insight they give to Charnock's life and thoughts. Apart from the usual preoccupations of his profession, he also had an amateur interest in Atlantic exploration, and in his study he had an astrolobe, maps, a globe and other navigational instruments. He rather quaintly described the difficulties he found in trying to decipher Medieval English texts on alchemy, which were as harde to my understanding as yff I had harde one rede a booke off the language off the natione which dwell in the fourth parte off the worlde named America.:))

His uncle, also called Thomas Charnock, had been an alchemist, as well as the confessor to Henry VII. Thomas' interest in the subject appears to have been stimulated when he inherited his uncle's books while in his teens. Although he married in 1562, and had two children, he preferred the life of scholarly solitude, made clear in the preamble of the treatise he wrote for Elizabeth I. He says that his pursuit of the philosopher's stone has in large measure been impeded by 'worldly necessities', and that the said stone is reserved for men who have the gift of 'solitariness.' He took this seriously enough to ask Elizabeth to allow him to carry on his experiments in the Tower of London, or another 'solitary place.' This was probably stimulated by the hostility of his neighbours, which forced him to barricade himself in his cottage. His appeal to the Queen was ignored.

His work was tiresome and demanding, requiring him, amongst other things, to keep a fire burning at a constant temperature. Quite often he would wake up in the night, troubled that things were not going well. Concerns over servants, fires, and the cost of fuel were steady preoccupations. He was also pursued by fairly constant bad luck "God send me better fortune or else I am clean discouraged and will turn from philosophy to husbandry and go and get me unto the plough." When England went to war with France in 1557 the local Justice of the Peace, who seems to have been a personal enemy, made sure that poor Thomas was forced into service. In frustration, he took a hatchet to his equipment, smashing glasses and pots alike. Nothing daunted, he was back at his experiments seven years later.

It seems obvious from the hostility he engendered locally that his neighbours had deep superstitious fears, which Carnock did much to encourage, describing himself as a magus as well as a philosopher, who had mastery of "dark and misty terms." After his death it was reported that no-one would live in his former cottage, which was "troublesome and haunted by spirits and that its owner had a reputation as a troublesome person and a conjurer."

Charnock himself was always aware of the ambiguity of his art, warning that Roger Bacon, the founder of English alchemy, had come dangerously close to to the occult, and had ultimately been unsuccessful in his quest for the stone because the Devil was his familiar. His own search for the stone proceeded in the face of one failure after another. Even so, he kept his fires burning for three years constantly, which "brought him more joy than any worldly goods." Though he constantly bemoans the frustrations of his quest, he warms any independent reader not to be deceived by surface appearances, and that he deals in allegories and veiled truths. His victory, if it can be so described, was in simple perseverance; in the pursuit of a 'truth' that remained constantly elusive. In his notebooks he might be said to have penned his own epitaph;

For the sorrow that he hath suffred many a year. 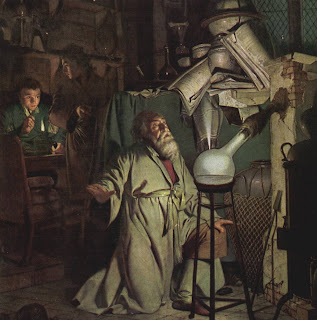 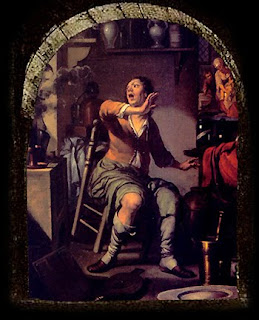