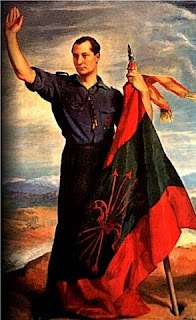 For me it’s an oversimplification to call Jose Antonio Primo de Rivera a Fascist; but there again it is probably an oversimplification to call anyone a Fascist who was not a member of the Italian National Fascist Party or the British Union of Fascists. The Nazis, for example, almost never referred to themselves as such, and Jose Antonio specifically rejected the label in 1934 as an appropriate descriptive term for his Falange.

The problem is, you see, that the very term Fascism has really no intrinsic meaning, and the various radical and right-wing parties to whom it has been applied have differed from one another in almost every fundamental. There was certainly the common emphasis on the nation; but this kind of ideology was not restricted to parties of the radical right. One might conceivably detect some overlap between the early Fasci italiani di combattimento and the Falange, with the stress on direct action and on forms of National syndicalism; but early Fascism was anti-clerical, whereas the Falange took a stand on Catholicism and other traditional Spanish values.

Mussolini's movement developed in a more reactionary direction by allying itself with the big landlords in northern Italy, whereas Jose Antonio's Falange was just as critical of landlordism as it was of Communism. His political programme, moreover, looked in essence to the recreation of the state headed by Miguel Primo de Rivera, his father, which could not be described in any meaningful sense as Fascist. Jose Antonio was radical; he was conservative; he was Catholic; he was nationalist. Above all, he was Spanish
Posted by Anastasia F-B at 16:40