Heretics had to burn in England, yes, but why and for what reason? The timing of the introduction of De Heretico Comburendo in 1401, the law that allowed for this practice, hitherto unknown, intrigued me.

The facts are, I suppose, quite simple: the passing of this rather extreme measure at that particular point in English history had a little to do with religion and a lot to do with politics. You see, Henry IV had only two years before the introduction of De Heretico Comburendo deposed his cousin Richard from the throne of England in highly controversial circumstances. There were other people, moreover, who had a claim to the throne just as good if not better than he did himself. He was thus open to challenge and was to spend virtually the whole of his reign defending himself against conspiracy, plot and treason in all of their many forms.

The one thing he needed was support, the support of the church above all. So, on the advice of Thomas Arundel, Archbishop of Canterbury, worried by the growth of Lollardy, a crypto-Protestant heresy, Henry decided that the flames would have to be lit. Rather burn heretics than lose the crown of England.

Henry’s second wife, Joanna of Navarre, probably unknown to most people who read this, has the right to be know as the only Queen Consort to be accused and condemned as a witch. Yes, she was. When Henry V, her step-son, succeeded to the throne in 1413he was anxious to renew the struggle with France, in the long conflict subsequently known as the Hundred Years War. Joanna, the daughter of Charles the Bad of Navarre, had relatives in the French service and refused to agree the king’s request for money. She subsequently found herself accused of attempting to poison the King by malificia. She was convicted, her lands seized and Henry got his money…and his war.

One does not execute royal witches, oh no. Joanna was kept, rather, in Pevensey Castle, and subsequently released after the death of Henry in 1422. Witch or not she is buried alongside her husband, Henry IV, in Canterbury Cathedral. 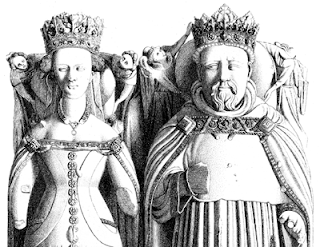