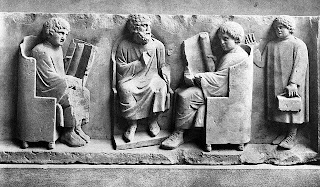 Schooling began early in the day, usually at dawn. Primary schools were attended by both sexes, and some of the higher grammar schools were also mixed. Children from prosperous families were accompanied by a slave attendant or tutor, and perhaps also a younger slave to carry books and writing materials.

At school if the pupil worked well he was kissed by the master (gross, I know, but true!). If not he was flogged. Corporal punishment was a regular part of the school day. Some educational theorists were advanced enough to suggest that it was important to take account of mixed abilities; not so Quintilian, who argued that children were spoiled by kindness-"We ruin our children's character...by petting and soft upbringing." One father in Roman Egypt shared this view, writing to his son's teacher, "Beat him, because ever since he left his father he has had no other beatings and he likes getting a few; his back has got accustomed to them and needs its daily dose." This view was also shared by the great Augustine of Hippo, though in the Confessions he recalls his own school days with horror. In the end, the severe but just father becomes the severe but just God.

Much of the education given consisted of cramming young heads with Greek. Some educationalists maintained that those in the social elite should begin life with Greek nurses, though others countered by saying that this would ruin their Latin accents. Once the basics had been mastered, and the pupils could read and write Latin and Greek, they moved steadily up the educational ladder, reaching the rarefied heights of subjects like rhetoric, where they would often be presented with problems like the following: The law ordains that in a case of rape, the woman may demand either the death of her assailant or marriage without a dowry. A man raped two women in one night. One woman demands his death; the other marriage. Discuss. Yes, this is a real example!

Some were inclined to poke fun at this kind of pedagogy, including Petronius, who wrote "Young men are made into fools at school; people fed this stuff can no more be sensible than kitchen workers can smell rice." But this view was far from typical, and educational relevance was not an issue of any great importance for most Romans. Even medicine had a largely unapplied and philosophical basis. The chief purpose of education was to distinguish between those who had mastered complex literary forms and those who had not. And finally, here is a list of questions and answers from a Roman school text which summed up a limited and rather gloomy view of life;

What is a Man? A short lived ghost.
What are Riches? Everyday power.
What are Words? Blindness.
What is Authority? Poverty.
What is Wealth? A ridiculous page.
What is Woman? A daily Drudge.
What is Law? Necessity.
What is Holiday? Work.
What is Death? Freedom.
What is Loneliness? Kingship.