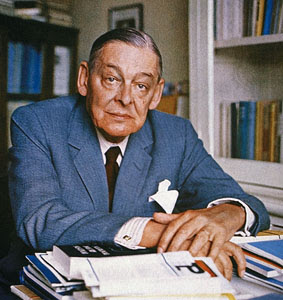 I was surprised and delighted to discover that T. S Eliot had been voted that nation’s favourite poet in recent a BBC poll: surprised because his poetry can be quite demanding; delighted because he happens to be high on the list of my favourite poets. Indeed, he only just beat John Donne, who is my favourite. The other poets in the top ten included Benjamin Zephaniah, Wilfred Owen, Philip Larkin, William Blake, W. B. Yeats, John Betjeman, John Keats and Dylan Thomas. The poll itself comes in the wake of the BBC’s poetry season, of which I watched just about every instilment. It was thanks to this that I began to read and appreciate Larkin properly; thanks to this that I discovered High Windows in all of its simple and magical intensity.

I am, however, under no misaprehension about this kind of thing. Those who took part are most likely a small and very selective group of people, not really representative of the ‘nation’. Indeed, I seem to remember that If was selected not so long ago as the nation’s favourite poem, though Kipling does not even feature in the BBC poll. So, meaningless it may be, but I’m still delighted if more people, no matter how small a sample, appreciate the unsettling beauty of The Love Song of J Alfred Prufrock.