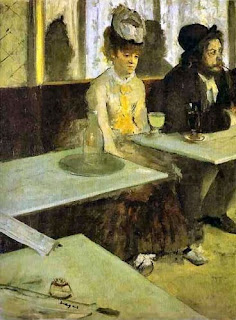 I first saw Absinthe on sale a year or so ago in a bar in Prague. I was quite surprised considering its ferocious reputation, something I had learned about in studying France and the literary demi-mode of La Belle Époque. This was a dangerous, maddening drink associated with the decadent and the degenerate. But it is also a drink which, in its original form, not in its recent reincarnation, has strong associations with witchcraft.

Absinthe is the Latin for the herb wormwood (Artemisia absinthium). The drink enjoyed by the likes of Oscar Wilde, Edgar Degas and Ernest Hemingway was distilled from its leaves, with other herbs added to make up the blend. Wormwood has ancient and powerful magical associations. The Latin root indicates clear associations with Artemis, who, amongst other things, was the goddess of the moon and witchcraft.

In magical terms wormwood is an ambivalent plant, a tool of malevolent witchcraft and a guard against its effects. In medieval times the ‘worm’ conjured up images of the serpent of the Bible, the Old Dragon, of Satan himself. By legend the herb is said to have sprung up as the serpent slithered out of Eden. So, its ominous reputation was long established.

Wormwood has been used in potent herbal brews for centuries, long before Absinthe itself was distilled. Witches used it in healing and love potions. It also, again by the light of legend, enables the drinker to communicate with the dead, and was also brewed with that specific intent. The danger here is that, unless carefully prepared and administered, one is just as likely to join the dead as communicate with them!

Although it was added to ale in England in the Middle Ages the modern drink only emerged at the end of the eighteenth century, when it was invented by a French doctor by the name of Pierre Ordinaire. Bottled and sold for commercial purposes it eventually came into the hands of Henri-Louis Pernod, who purchased the formulae. Once in his hands Absinthe began its journey into a wider world…and to infamy. Because of its emerald-green colour, and its associations with witchcraft, it soon acquired a nickname- La Fée Verte, the Green Goddess or the Green Fairy.

The glass I had in Prague had a fairly modest alcohol content, but that consumed by the bohemians of Paris was an unbelievable 120 to 160 percent proof. Because of this it was almost never drunk undiluted rather blended with water. The bitter flavour also required the addition of sugar.

In echoes of the magical reputation of wormwood, at once bad and good, Absinthe itself acquired an ambivalent reputation. Artists and writers commended it as exciting and stimulating while the authorities, identifying it with a subversive counter-culture, began to perceive it as malevolent. It was actually banned in the United States in 1912, well in advance of full prohibition. France followed this lead in 1915.

It seems obvious now that the reaction against the Green Fairy was essentially part of a wider moral panic than because of its perceived harmful effects. It’s now widely available again, though at a weaker proof. Its even sold and distilled in France where the prohibition lasted longest. Did I enjoy it? Wait a moment; I shall have to ask Artemis and the green Fairy. :-)) 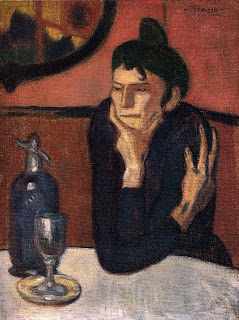 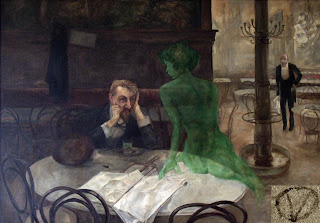 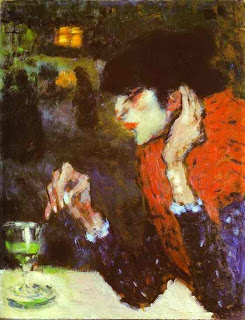