Mad Hattie on the Doorstep 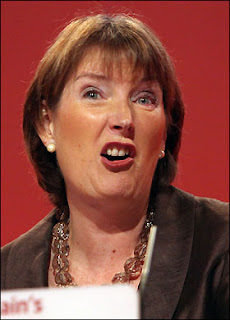 Seemingly Peter Mandelson, Lord Rumba of Rio, gave Harriet Harman, nominally Labour’s deputy leader, a bit of a tongue lashing recently and she is not best pleased. Harriet, better known to her many friends and admirers as Mad Hattie Harperson, has rather been shoved to the margins of Labour’s electoral campaign, possibly as a major source of embarrassment, who can tell? But she has thrust her way back, insisting that she will not be ignored.

For me Hattie has always come across as the head girl that everyone at school is supposed to admire but secretly hates; all cold porridge and early morning hockey. Honestly is it possible not to hate her and everything she represents, all the hypocrisy and double-standards? There she is preaching equality and equal rights just as long as she is more equal than others. She sends her own children to good private schools while being part of a government that is attempting to use the Charities Commission as a weapon against the whole independent sector. She is the kind of person, moreover, who thought in her condescension that she had every right to drive away from the scene of an accident, announcing to observers that they would know where to find her.

I read an interview with her in the latest issue of The New Statesman in which she says she is out energising the troops; that she is to be ‘found on the doorstep’ more than on television and at press conferences. Gosh, what a thought: opening one’s front door to find Mad Hattie! This news could conceivably be a major boost to the manufacture of peep holes, which might help Gordon Brown’s economic recovery to leap from tiny to significant percentages. Perhaps there is a plan here?

Hattie has some aristocratic connections, being the niece by marriage to the late seventh earl of Longford. I had never heard of this person until I recently read a biography of Myra Hindley, the serial killer, with whom he was great chums, campaigning endlessly for her release from prison as early as the 1970s, before she had served any time at all. He seems to have been as woolly-minded as Hattie, so the two of them probably got on famously. But Longford thought that homosexuality was ‘nauseating’ and ‘utterly wrong’; so the government's equality legislation may very well have landed him in a spot of bother!

Hattie and Lord Rumba are what now passes for a Labour aristocracy in our cheapened and traduced age, people who have decided the fate of the nation from the frightful dinner tables of Islington among the pesto peasants. There they are on the one hand, with the vulgar John 'Two Jags' Prescott on the other, the ugly faces of the age. What did this nation do deserve such frightful phizogs? And as you ponder that question do please be careful who you open your door to. After all, one never knows who, or what, might be found there. :-)