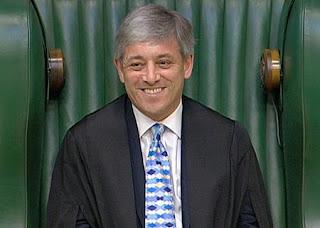 The Rotten Parliament is gone, one hopes never to rise again. But there is one man standing for re-election who seems to me to be a living reminder of its existence, of everything that was wrong with that wretched assembly. He is John Bercow, the Speaker of the House of Commons.

Standing for re-election in his Buckingham constituency he will by convention be unopposed by the other main parties. It’s rather a pity because I would like to see a genuine Conservative stand against this man. It’s no secret that he is widely detested in the Party, no secret that he was elected as Speaker in a game of farcical one-upmanship by Labour MPs at a time when Parliament needed, more urgently than any time in its past history, a figure of determination, courage and stature, someone who could face the expenses crisis head-on and rise above it. It needed a giant; it got Little Bercow.

Simon Heffer was in fine form in last Saturday’s Daily Telegraph, aiming both barrels at this ridiculous man. And as he quite rightly says the voters of Buckingham, those who want a genuine conservative, do have a choice. There are those on the fringes who are mounting a challenge to Bercow, but the one with the best chance would seem to be Nigel Farage, the Euro MP and former leader of UKIP. “I am in no doubt that the people of Buckingham”, Heffer wrote, “not least to perform the public service of removing the smear of Bercow from British politics, should vote for Mr Farage.”

Well, yes, I would vote for him if I lived in the constituency. It’s certainly one of the results that I will be looking out for on election night itself. After all, this might very well be the 2010 version of the Martin Bell moment, the moment when the man in the white suit dislodged Neil Hamilton at Tatton. And Farage would have the added virtue of not being Martin Bell! Not so much Mr White Goes to Westminster, more Mr Blue goes to Westminster. Blue, because he has embraced traditional conservative policies that I feel sure will go down well with many of the local people, especially when set against Little Bercow, a symptom of all that has been wrong with our politics over the past few years.
Posted by Anastasia F-B at 16:08