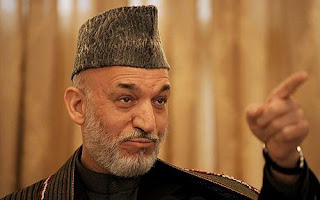 Those of us who believe that our soldiers' lives are being put at risk to uphold the fraudulent Karzai regime in Afghanistan could wish for no better confirmation of this unsettling truth than from the man himself. He is now blaming the UN for what he has called the “vast fraud” in last August’s presidential poll. It was an attempt, he says, to deny him victory or discredit his win.

He did not stop there. Clearly singing to the gallery, he has said that the NATO forces fighting the Taliban, fighting on this man’s behalf, I might add, are at risk of being seen as a ‘occupiers’. Because of this, he continued, the Taliban-led insurgency “could become a national resistance.”

These remarks were made on national TV, following soon after parliament rejected his attempt to take direct control of the country’s electoral institutions. It’s a slur on British, American and other coalition forces. More than that, he has, in his hubris and his vanity, his annoyance at his recent ticking-off by Obama, effectively undermined the morale and credibility of his own military by implying that the country was under foreign occupation. All of this is worth remembering when we hear that yet another of our service personnel has died in that impossible country, that anus mundi.

I’ve long since stopped believing that our presence there is essential to our security at home. It’s nothing of the kind. The Taliban are far less danger to us than our own Karzai-style government, which in its neglect of national security has allowed hostile elements to flow across our borders in ever increasing numbers.