Saying no to Smiler Brown 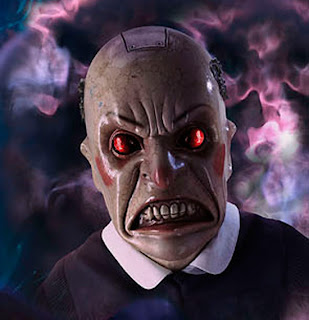 Did you watch Dr Who on Saturday? I’m an avid fan and I think the new Doctor is such a dream; I just love languid, laid-back men! The episode itself was called The Beast Below. Let me just sketch a brief outline.

The Doctor with Amy Pond, his new assistant, arrives in a future where Britain is a wandering spaceship. On landing he and Amy find a community dominated by some grotesque smiling puppets. At five year intervals people have the right to go into a voting both, presided over by a smiler, places where they are shown a video tape of the realities of Spaceship UK. Then they are given a choice: press a protest button or press a forget button. But the message is so awful that people invariably push the forget button. “Every five years”, the Doctor said, “people chose to forget what they have learned-democracy in action.”

My dear Doctor, touché! My goodness, is there a Conservative resistance cell deep within the bowels of the socialist BBC, I have to ask? A grotesque smiling face asking all of us to forget everything that has happened since the last election, could there be any better metaphor for the present realities of Spaceship UK?

But I’m a rebel; I always have been. I chose the protest button as an angry scowl appears on the face of the puppet. And what do I see? Unbelievable levels of fiscal irresponsibility by a smiler who was Chancellor and who is now Prime Minister. I see a man who created a kind of South Sea Bubble economy, recalling the great financial crisis of the eighteenth century. I see a man who sent more and more soldiers to places like Iraq and Afghanistan, while starving them of the equipment necessary to perform the task they had been given.

I see a man who allowed immigration to get out of control, to the point where the cultural cohesion of this country is in danger. I see a man who presided over one of the most venal and corrupt Parliaments in our history, again with eighteenth century parallels, and immediately went into denial when the truth came out, not having the courage to begin a proper cleansing of the Augean Stables.

I see a man responsible for ever greater moral turpitude in the standards of public life, surrounding himself with aides whose favoured method of dealing with opposition and perceived enemies is the vilest forms of character assassination. I see man who surrendered more and more of our national sovereignty to a corrupt European oligarchy, a practice that at one time would have been defined as treason. The list could go on and on.