A little touch of Annis in the night 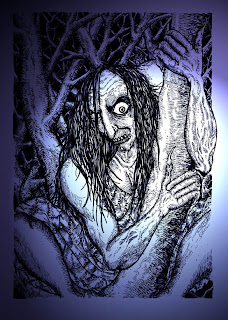 Black Annis, sometimes known as Black Agnes, Black Anna or Cat Anna, is the Hag of the Dane Hills near Leicester in England who most frequently appears as a blue-faced crone with long claws and yellow fangs but also as a cat demon. In some ways she might be said to be an English version of Baba Yaga, the fearsome Russian witch. Her home was a cave known as Black Annis' Bower that she herself carved out of the rock. The cave itself, long a local feature, was almost completely filled with earth by the nineteenth century. It’s now covered by a housing estate built just after the First World War.

According to legend Black Annis eats any children who stray into the Dane Hills after dark, skinning them first and then scattering their bones. The skins were then hung on the trees to dry. When she is particularly hungry Annis goes hunting, either taking the lambs from the fields or climbing through windows to take babies from their cradles.

In the form of Cat Anna, she has powerful associations with cats, occasionally taking the form of a huge black forest cat. Until as late as the eighteenth century a mock hunt was held annually during which a dead cat soaked in aniseed was dragged from her cave through the streets of Leicester to the mayor's house. The symbolism here is now lost but aniseed is traditionally used as protection against malevolent spirits.

By some accounts Annis is a form of the ancient Celtic goddesses Anu or Danaan. There are also resemblances between Annis and the mother of Grendal, the monster from the poem Beowulf, also identified as a ketta or cat spirit.

Though the story has been enriched in folklore, Annis, it has been suggested, has possible historical origins, rooted in the lives of two fifteenth century women. The first is Agnes Scott, a Dominican nun and anchorite. Draped in the long black habit of her order she was described as the ‘hermit of the forest.’ Agnes, who died in 1455, also managed a leper colony and supposedly lived in a cave near the Dane Hills. The connection between her and Black Annis was first made by Robert Graves, the poet and writer.

The second, much more tenuous candidate, is a local witch or wise woman who is said to have forewarned Richard III of his coming death as he rode through Leicester on his way to meet the army of the invading Henry Tudor at Bosworth. Alas, this is one of those tales where history and legend draw close to one another though, as always, never quite managing to meet! 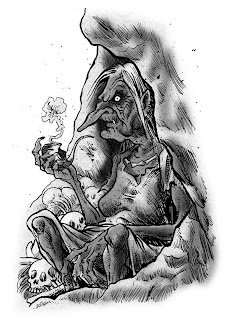